Inconsistent display of TraditionalForm in version 9

After installing version 9, the default style sheet uses Arial font in text and formula cells. So far, so bad. At least one would hope this is done consistently.

But now I see this:

You can see that the default font for TraditionalForm in output cells is Times, which will make such output look disjoint from the equations in inline or displayed maths. The $1$ on the output line has serifs, while the 1 on the third line (in the text cell) are sans-serif. This is what I would call visually disjoint, or incongruous.

What would be the best way to change the default font for the TraditionalForm output so that it always remains consistent with Arial (i.e., is displayed as sans-serif) when the default stylesheet is chosen?

I am aware that I could also try to change the default stylesheet back to version-8 style as discussed in "How to use version 8 default.nb style sheet in place of version 9 default.nb" - but here I'm asking what to do if I don't want to go back to Times font, only trying to get a more uniform sans-serif appearance.

Sorry to say that the inconsistencies extend far beyond the above.

I only realized this morning that many important math symbols remain in the old form that was based on Times glyphs, even when the rest of the expression is converted to Arial. Here is a screenshot where I typed the math symbol paired with a corresponding normal Arial character - first some double-struck glyphs, then $\hbar$, then some Greek. The square root also looks unchanged from Times font, which may be OK but isn't how I recall sans-serif square roots looking. One important problem in the juxtaposition between pairs of special and normal characters is not just the presence versus absence of serifs, but also the general mismatch in the heights.

The last comparison between $l$ and $I$ is of course just a reminder of how bad the Arial font is on general grounds, I'm not asking how to fix that...

As a result, I think the inconsistencies I'm worried about can't be removed completely until a whole new set of glyphs is added to the Arial font. I'll have to give it some more time before perhaps accepting one of the answers, although I'm not at all happy and currently waiting for a miracle.

Two alternative titles for this question:

Update: the second part of this question appears to have been fixed in version 10.1 (except that I still think Arial is a bad font for math typesetting). However, the first part is still unchanged.

To specify the style of inline formula, there is a style called "InlineCell". Add the following to the stylesheet would do it:

Or specify the "TraditionalForm" style as Rojo said to make sure the font used in inline formula is consistent with it used in stand alone TraditionalForm cell.

Note that "InlineCell" style has a higher priority level than "TraditionalForm" style.

I have no clue yet why this behaves like it does, but if I understood you correctly this workaround would perhaps suit you.

You want all traditional form to display in Arial? Then open your Default.nb stylesheet, add the style TraditionalForm (by typing it in the InputField above), select it, open the Options Inspector and set FontFamily explicitly to Arial

The TraditionalForm style does not specify a font family by default, and I still haven't found where it inherits Times from for Input and Output cells, and I can't test a lot right now...

Not an answer. Please do not upvote nor downvote me. I just need to show Jens what I get on V9 since I switched to Default_8.nb now. (can't paste images in comments) It looks ok now. 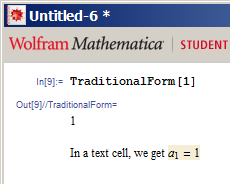 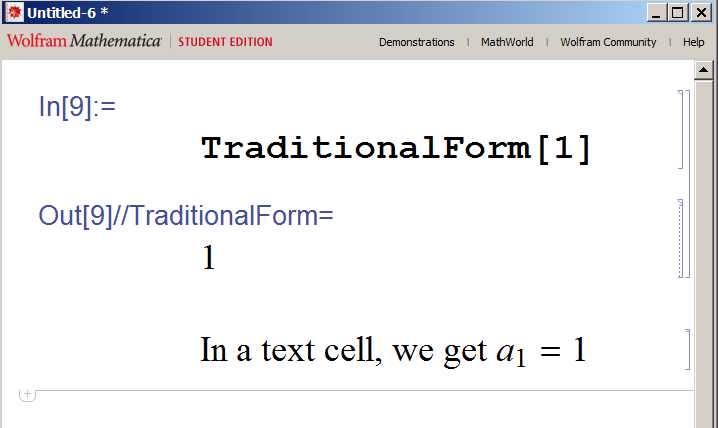 Not the answer you're looking for? Browse other questions tagged output-formatting stylesheet fonts or ask your own question.

631
xkcd-style Plots
15
How to get the new font in Mathematica 10?
10
Cell sizing and labeling for $\textit{MaTeX}$ equations
29
Writing a technical note in Mathematica
6
Rendering percent symbol in the correct typeface
5
How to use version 8 default.nb style sheet in place of version 9 default.nb
3
How to make "Text" Cell which does not auto-format in TraditionalForm in-line math expressions?
1
Is there any automatic way to use specific font specifically for math?

9
How do I set the fonts for Input and Output in my stylesheet?
5
How to use version 8 default.nb style sheet in place of version 9 default.nb
2
Font changes once Exported for Text inside a Grid
0
Why MMA cannot apply the correct style of unit?
8
Custom fonts show as boxes when opening Mathematica-made PDFs with Illustrator
18
How to get rid of new default Version 11 and 12 Input/Output fonts -> and keep the traditional Courier font
4
Why does Mathematica ignore my stylesheet for DisplayFormulaNumbered cells?