The fastest thing since sliced cubes?

I've fallen down a rabbit hole recently, and need a reality check.

Suppose you have an arbitrary unit vector, $u \in \mathbf{R}^3$, and you cut up the unit cube into slices orthogonal to $u$ with width (measured along $u$) $\delta$. What are the volumes of the slices?

Here's what I mean: 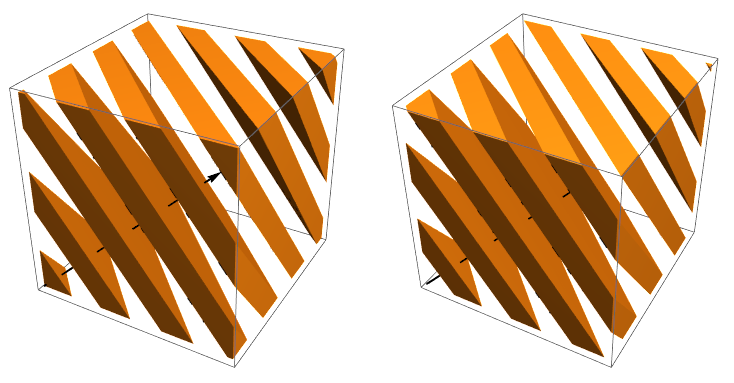 (Each image shows every other slice. Code for creating the images is at the end of the question).

Then, for the example that generated the above figure,

Which is all well and good, but that took over a second and there were only 18 slices (as shown in the image... there's a tiny slice of leftovers at the top right of the plot on the right). I would like to be able to use this as part of a function to be fed into NMinimize as $u$ runs across a range, with on the order of several hundred slices. Clearly, RegionMeasure[ImplicitRegion[...]] isn't up to the task.

So the question is...

What can I do to make it fast enough?

And, while we're on the subject,

How fast can it be done?

It feels like this should be straightforward -- it's just unit cubes and unit vectors, after all. How hard could it be? On the other hand, it's not like simple things can't be complicated. Which is why I need a reality check.

I've tried a number of improvements to the slicevolumesIR approach, the most successful of which I'll describe below. But it seems rather convoulted and verbose to me. I can't help feeling that there's still a lot more that could be done to simplify and speed up the process.

(Compiled and/or Parallelized code is fine. I haven't done either so far because I didn't want to use Compile to cover up inefficient code and I might want to save parallelization for the outer code. But if you can make use of it here, then it's fair game.)

The main observation here is that the volume of each slice of the cube is approximately proportional to the area of the cross section (orthogonal to $u$) down the middle of the slice (in a Riemann sum sort of way). Since the volume has to sum to 1, we can normalize these areas to get pretty good estimates of the slice volumes.

A couple of points about how I've gone about it:

Set up some global variables for describing the cube:

Try it out on the example from above:

Which is a pretty good improvement over the ImplicitRegion version, and fairly accurate

(and accuracy will increase with the number of slices).

Plot the planes (code in Appendix): 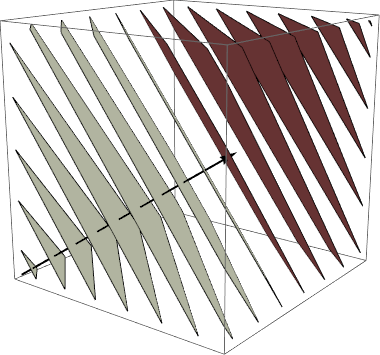 Here's a comparison with a larger number of slices (288, as it turns out). 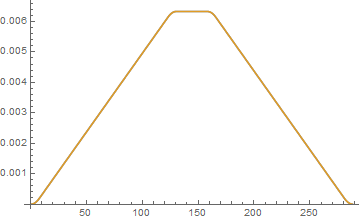 So there is very good agreement, and slicevolume2D is over 500 times faster than slicevolumeIR. Still, I'm left wondering if it's overly complicated and there isn't a simpler/faster way to do this.

Appendix 1: Code for the figures

Plotting the slices (for slicevolumesIR) or polygons (for slicecolumes2D) is simply a case of returning the regions instead of their computed measures. In the first case:

Here's the benchmark from earlier for @ybeltukov's sliceMeasure function. I am restricting sliceMeasure to a 3-dimensional unit cube fixed with origin {0., 0., 0.} and $u$ being a unit vector. Note that it works just as well on arbitrary $n$-dimensional parallelepipeds floating around in $\mathbf{R}^n$ with $u$ being whatever you like.

It seems absurd to compare accuracy, since sliceMeasure doesn't make approximations in the same way that slicevolume2D does, and I have no reason to suppose that slicevolumeIR is more accurate than sliceMeasure (but Max[Abs[Differences[volumes] - volumesIR]] == 7.62888*10^-15, so they're very close).

But that's not the half of it, since sliceMeasure really comes into it's own on longer lists:

In summary: sliceMeasure is clearly "fast enough", and I'd be very surprised if any kind of significant speed increases were possible. But, more importantly, it is also an elegant mathematical formulation of the problem, and very concisely coded.

There is a general problem of slicing $n$-dimensional parallelepiped by a hyperplane. Fortunately, it can be solved using the following piece of code:

Let me demonstrate some examples: 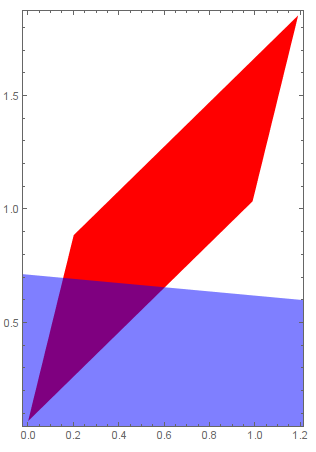 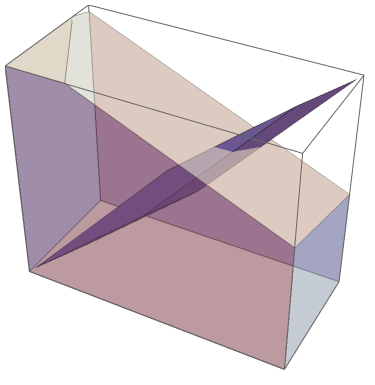 Less than a second! 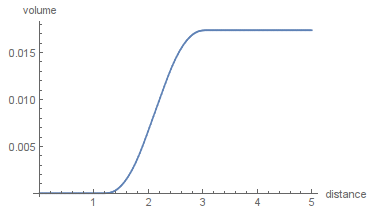 P.S. the volume between two planes can be easily calculated as a difference for two different slices.

2
How do I detected linear clusters of points in 3D data?