How to use $\LaTeX$ for typesetting labels and titles in Mathematica

I need to typeset large number of equations to be used for PlotLabel and Titles and such. These have to look nice. Hence I use TraditionalForm with HoldForm and this works well, except for a tiny little annoying thing. This below is just an example:

I used () above as a hint to leave Sin[] alone, but this hint did nothing.

But the above is a small example. I have much larger equations, and would be nice if I could tell Mathematica when I type it, using () or another trick, to please not group these subexpression as it did in the above example (I'd like the equations to look exactly as they appear in the text book.

It is not a big issue really to use HoldForm many times to force the shape to look exactly as I wanted, but just thought to check if someone knows an easier way to do this other than what I have shown.

I just had a thought! is it possible to use $\LaTeX$ directly to typeset things in Mathematica for purpose of display? i.e. it would be nice if one can write something like Text["$\frac{v}{w} \sin(t)$"] and have Mathematica interpret this as $\LaTeX$, and typeset it as $\LaTeX$ output. If possible, I can just write everything in $\LaTeX$ as strings, and problems solved. What I mean by the above is as follows (only to help explain the point):

In MATLAB I can do this: 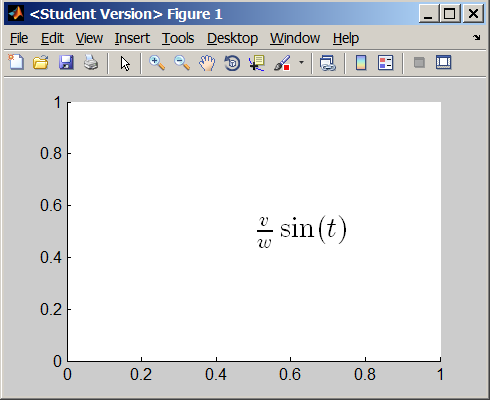 Notice I had to tell MATLAB to use the $\LaTeX$ interpreter. But that is all. It will be really nice to be able to do something like this in Mathematica if possible. Using Strings also avoids many other problems when typesetting symbolic expressions in Mathematica since a string is inert and a raw Symbol and can't have value other than itself.

I'll treat this question as being mainly about annotating graphics using LaTeX syntax. For that purpose, here is a template that you could use: 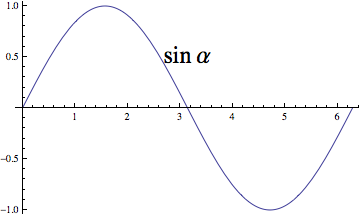 However, there are several caveats because the ability of Mathematica to interpret $\LaTeX$ is limited. I'm copying this in slightly edited form from a list of issues that I had lying around on my web site:

Finally, when Mathematica fails to translate from $\LaTeX$, create a snippet of the MMA code that you think should be generated. Put this into TeXForm. From the result, you can often guess the required $\LaTeX$ form that will work in reverse as an input to ToExpression.

If this is close to what you wanted, maybe you can edit the title of the question to include $\LaTeX$.

MaTeX is a package made exactly for this purpose. It can automatically compile small LaTeX snippets and import them as Mathematica graphics.

It is described in detail in this other Mathematica.SE answer.

A short tutorial is available here.

Finally, to show what it can do, this is an example plot made with MaTeX labels (borrowed from the tutorial above, which has full code for it): 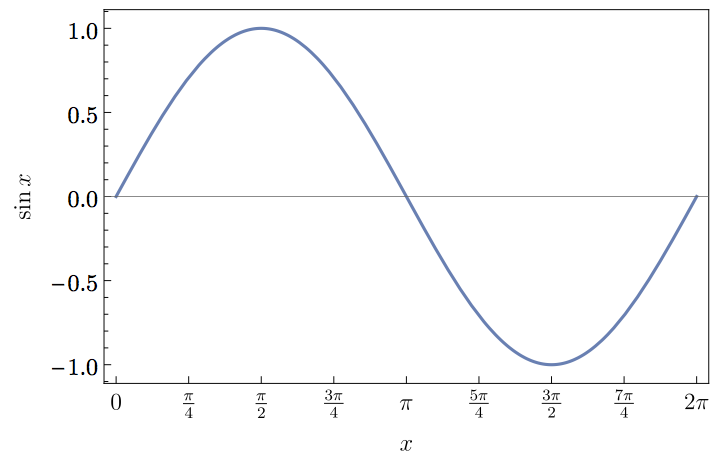 Basically you can create your own PlotThemes in MMA 9+ allowing you to always use the same font sizes and especially font stlyes. Thus, using a Theme with your document font size and the latex fonts (e.g. "CMU Serif") and a fixed ImageSize creates eps-plots of decent quality. If you need to change something, you just change the custom PlotStyle and let MMA redraw the plots.

Not the answer you're looking for? Browse other questions tagged formatting latex or ask your own question.

2
Problem with converting \frac into mathematica output
0
How can I put Latex mathematics in the labeling of the axes of a figure?
0
Comments including LaTeX commands in Mathematica
1
Why am I getting a conditional output when importing the Dirac Equation to Mathematica?
136
$\LaTeX$ and Mathematica
39
Export Plots to $\LaTeX$
26
How to convert the $\LaTeX$ format to Mathematica input?
9
Create complicated text formulas in graphics
8
How to type a capital 'E' in Mathematica 9 using 'ToExpression' and 'TeXForm'?
15
How to use $\LaTeX$ in Mathematica text
See more linked questions

136
$\LaTeX$ and Mathematica
3
Need help translating Mathematica code to LaTeX
4
Typesetting LaTeX in a text cell
3
Organizing Algebraic Expressions (for $ \mathrm\LaTeX $ conversion)
12
LyX-like LaTeX in Mathematica Text Cells
2
Mathematica Function Definition to Latex?
1
How can I copy the cell as LaTeX code but the look remains as what I typed?