I am working on Project Euler 178 but got stuck in trying to optimize my code. The following text comes from the problem:

Consider the number $45656$. It can be seen that each pair of consecutive digits of $45656$ has a difference of one. A number for which every pair of consecutive digits has a difference of one is called a step number. A pandigital number contains every decimal digit from $0$ to $9$ at least once. How many pandigital step numbers less than $10^{40}$ are there?

I thought of computing the entirety of step numbers with less than $40$ digits and subsequently selecting the pandigital ones. The first way to generate these numbers that came to my mind was to define a function

which takes in input a list of lists, for instance {{5}}, and returns a list of lists with a prepended digit that differs by one from the original one, in this case {{4,5},{6,5}}. The first two cases handle the case in which the digit is $0$ or $9$. I'll handle the problem with the first digit being zero later. From here, I thought of nesting this by defining another function

that should be nested to obtain the result. For instance,

would generate the list of digits of the various $15$ digit step numbers that end with the digit $5$.

This solution is clearly non optimal and has performance problems, due to the fact that the number of lists that need to be handled grows incredibly fast: Startingfromfive is a list of $22001$ lists of $15$ elements each. The computation time seems to be growing exponentially, as can be seen from the following plot: 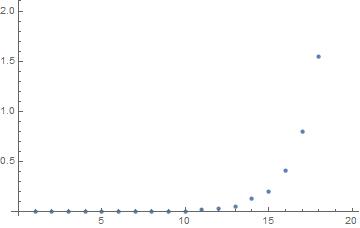 My machine gets up to $n=25$ in about $3$ minutes, showing the unfeasability for $n=40$ with the aforementioned method. I tried compiling the function, but it doesn't seem to show a substantial improvement.

Can this code be optimized or do I need to use a completely different approach?

This code is faster than yours, but unable to solve the full problem.

Using this function or your own, try counting the number of pandigital step numbers beginning with digits 1 through 9 for small values of the number of digits n. Do you notice any symmetries that can lead to short-cuts?

Not the answer you're looking for? Browse other questions tagged performance-tuning number-theory project-euler or ask your own question.

27
Finding long strings of identical digits in transcendental numbers
69
How to efficiently find positions of duplicates?
1
Generating a list of cubefree numbers
14
the more effective method to find 21 digits armstrong number
3
Triangular numbers boolean function
13
Finding vampire numbers
4
Generating numbers palindromic in two number bases
4
Consider all numbers, from two-digit up to 10-digit, written only with digits 1, 2, 3, 5, 7. Identify those that are perfect squares
11
Find if there are consecutive 1s in a binary representation of a number