It seems that built-in EdgeContract function doesn't work properly with weighted graphs, to be more precise, I mean that if I'm going to contract edge $e$ which connects vertex $v_1$ with weight $a$ and vertex $v_2$ with weight $b$ I expected to obtain one vertex which has $a+b$ weight.

So I'm going to implement my own function which will behave in the mentioned way.

My idea is to perform the following steps:

To implement this algorithm I wrote the following code:

Here graph_ stands for input graph object, edge_ is for edge that we going to contract and weights_ stands for list of original weights.

Unfortunately it gives me a lot of errors and I can't manage to debug them. 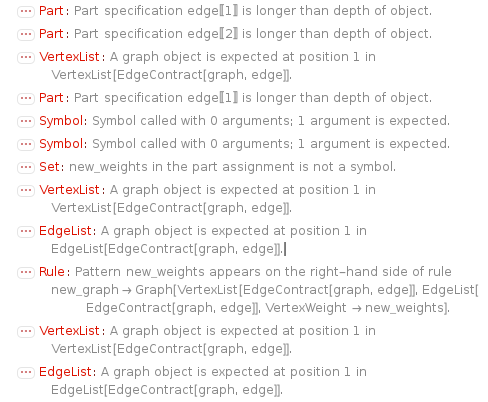 I will be very grateful if someone helps me to understand what is going wrong, correct these errors and implement the desired function. Suggestions of simpler algorithms, if they exist, are also welcome.

3
Assigning weights to edges of a hypercube based on the Gray code labels for vertices being connected
5
FindShortestPath with VertexWeight
8
Bugs in VertexContract function?
6
How to manipulate graphs without losing properties like EdgeWeight?
3
Cannot get Mathematica to recognise Vertex Weights of Graph
5
How to change order that graph edges are drawn
8
Remove or change edge weights of graph with good performance
1
How can I extract weights labelling edges starting from a fixed set of vertices
9
VertexContract and contraction of vertices of degree 2