Here's a little bit of code:

(note that I haven't given the explicit expressions for $f$ and $g$ because they're unimportant for the purposes of this question; suffice it to say that they're complicated enough for their partial derivatives to be horrendous).

I can ask Mathematica for the eigenvalues of $M$, and I get a pair of pretty decent (if horrible-looking) answers which are indeed functions of $x$ and $y$. If I attempt to extract the eigenvectors of $M$, however, Mathematica runs for a while and ultimately gives up:

Eigenvectors::eivec0: Unable to find all eigenvectors. >>

I've therefore resorted to graphing the (absolute values of the) components of the eigenvectors for different values of $x$ and $y$, which takes forever but works. Here's my code:

and similarly for the other three components. Here's an example of one of the components: 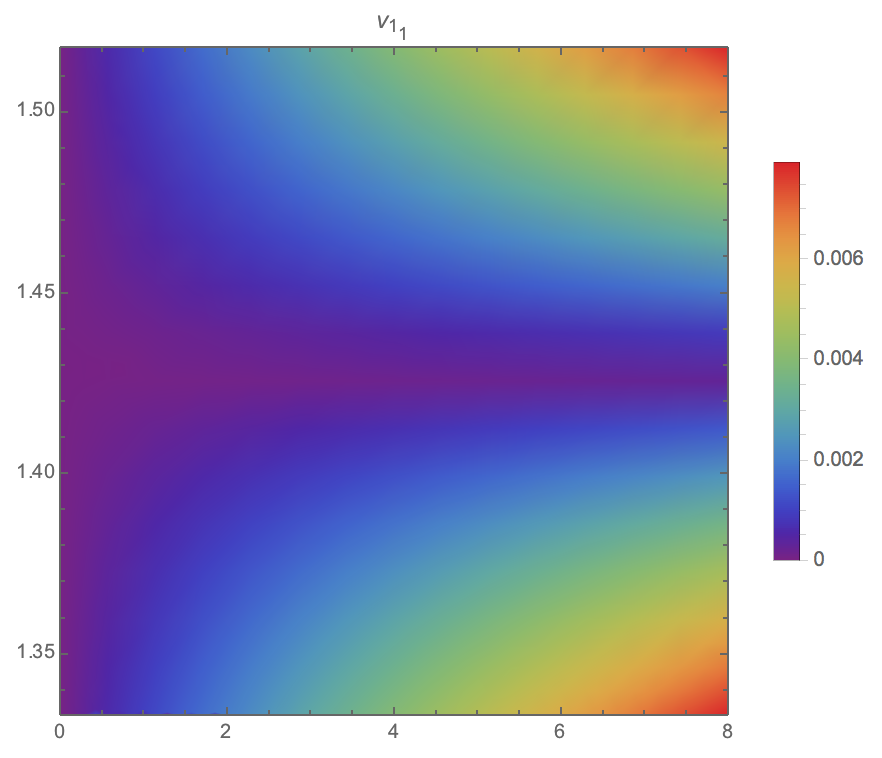 If they are numeric, eigenvalues are sorted in order of decreasing absolute value.

and the documentation for Eigenvectors says

Eigenvectors with numeric eigenvalues are sorted in order of decreasing absolute value of their eigenvalues.

For exact or symbolic matrices $m$, the eigenvectors are not normalized.

I therefore have four questions:

I am aware of this question, but that concerns only the relative ordering of eigenvectors to the ordering of eigenvalues, which is already answered in the documentation (and included in the quotes above). I am also aware of this other question, but that appears to be about intentionally reordering the eigenvalues rather than finding out whether Mathematica does it by default or not.

Thanks for any help.

I've run some more tests and have found the answer to questions 2 and 3. Mathematica does seem to be renormalising with each value of $x$ and $y$. Here's a graph of the norm of one of the eigenvectors: 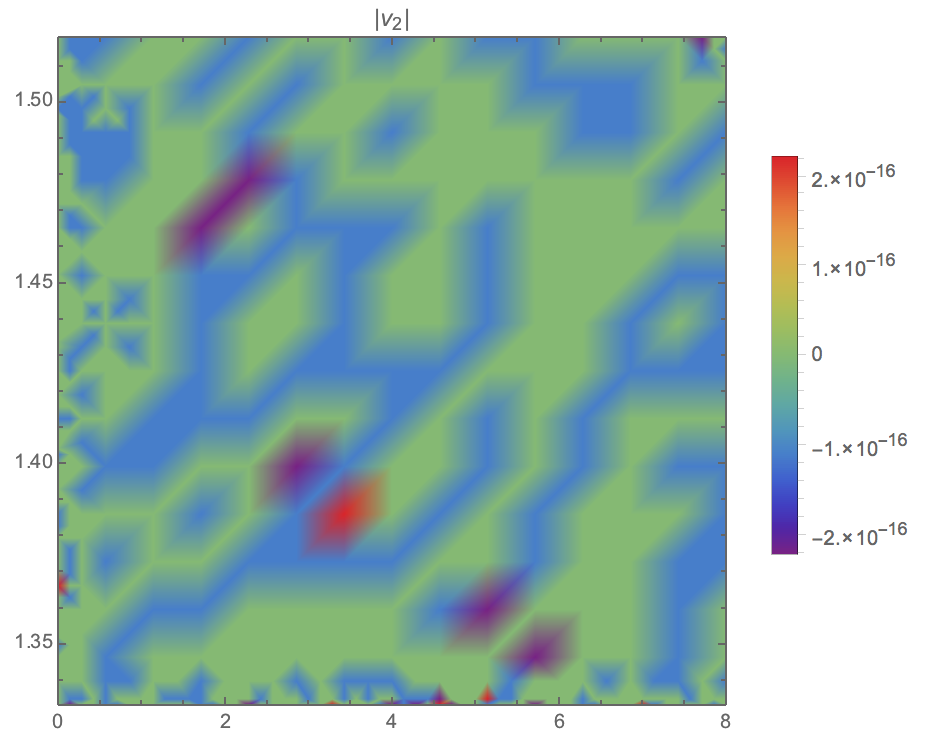 I'll ascribe the variation in the norm (of the order of $10^{-16}$) to machine precision (i.e. the norm of this eigenvector is $1$ throughout the domain). This seems to imply that Mathematica is not only renormalising the eigenvectors at each point, but it is actually giving me the eigenvectors normalised to 1 (contrary to what the documentation says).

Of course, this assumes that the order of the eigenvalues and eigenvectors is preserved regardless of which eigenvalue has a larger absolute value at each point. If it isn't, my whole interpretation of the above graph automatically goes out the window.

I've found the answer to question 1 by testing a little further. I built a matrix with eigenvalues whose ordering should change in a very obvious way: 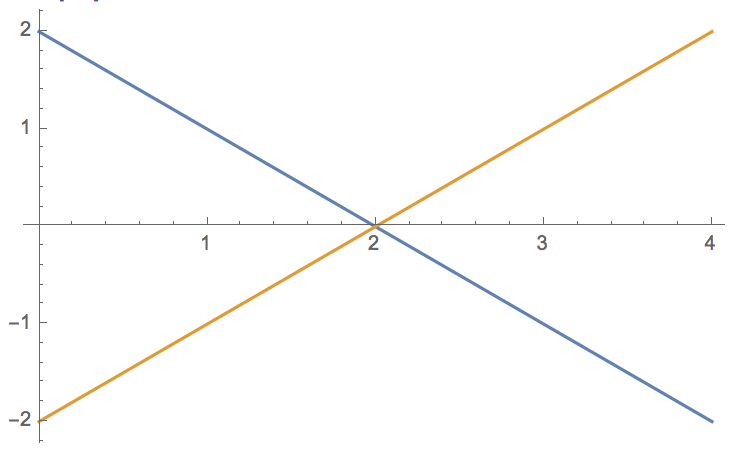 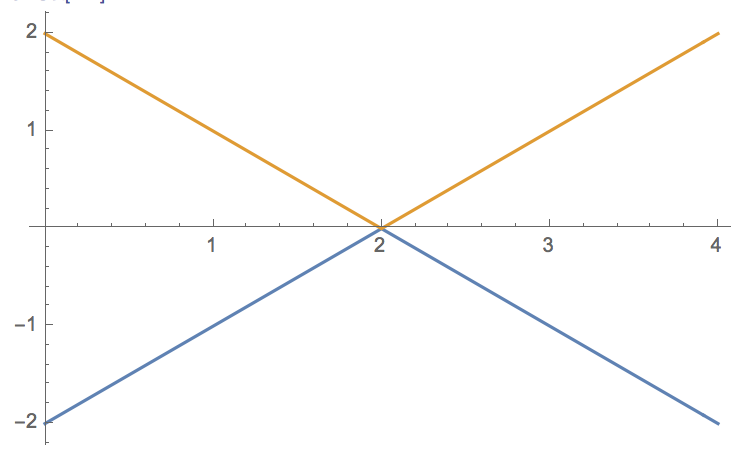 It is as I feared: Eigenvalues are reordered at each point. Clearly, then, eigenvectors are also reordered at each point, since the eigenvalue and eigenvector ordering must be consistent at all times (at least according to Mathematica). (This also renders my analysis on the answers to questions 2 and 3 wrong, although the ultimate answers (i.e. Mathematica renormalises to $1$ at every point) is still right because of what J.M. said in the comments.)

Other than having explicit expressions for the eigenvector components (which I do not have, as explained at the beginning of my original post), is there a simple way around this reordering?

Finally, as mentioned in the comment section, I've found a way around the problem posed in question 4, but I imagine it's highly dependent on the type of problem one is trying to solve.

In my case, I can graph $f(x,y)$ and $g(x,y)$ and see in which direction(s) they change most strongly. The eigenvalues and eigenvectors of $M$ are related to the partial derivatives of $f$ and $g$ with respect to $x$ and $y$, so I can use the (qualitative) visual information obtained from the graphs of $f$ and $g$ to "guess" which order the eigenvectors and the corresponding eigenvalues should be in (at least in regions where there is a clear difference between the directions of maximum variation of $f$ and $g$).

This is not a very satisfactory answer to question 4, but it is the only one I have so far.

Not the answer you're looking for? Browse other questions tagged matrix linear-algebra eigenvalues or ask your own question.