Multiply (not divide!) Vectors in a List by Their Own Norm

I know that I can find the norm of each of those vectors by mapping the Norm function onto the overall list, like so:

That is a list of 100 numbers. What I want to do now is multiply each of the vectors by their respective norms. (Note that I am not talking about normalizing them which could've simply been done by coding: Map[Normalize,vectors].)

Essentially, I'd like a one-to-one mapping where element 1 of the list "vectors" is multiplied by element 1 of the list "norms". I'm not sure how to do this. I thought of defining a new function where the argument would be a list (one of those 2-dimensional lists in the list "vectors" above) and the function would multiply the argument by its norm. However, I'm not sure how to program this function or if this is even an efficient way to do it. How could I define this so-called one-to-one mapping?

(My ultimate goal is to plot my resulting vectors, and then run a loop doing this over and over many times.)

You can use Nest to do it many times: 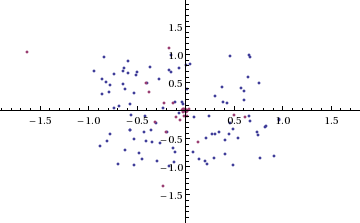 Oh, and to multiply two lists together element-wise just use *

You could still use Normalize, with a custom norm function:

Not the answer you're looking for? Browse other questions tagged vector or ask your own question.

3
How to pull scalars out of a function that should act on lists?
2
How can I test if a set is linearly independent?
0
Vectorization of a function
0
Making histogram from a vector