I have a slight problem with pairing up boundary points of BoundaryMesh with appropriate BoundaryNormals. Let's work with a simple domain for now:

Now the problem is, that box["BoundaryNormals"] is nested: this will be important later. However, we can unnest it and show the normals:

And this shows the problem: 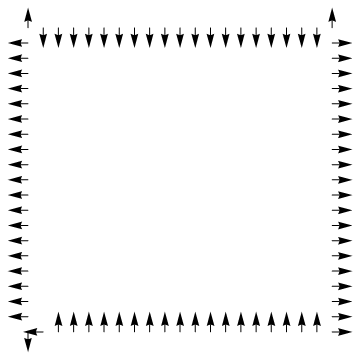 Normals are not appropriately oriented and some of them are messed up on the same side!

My favorite domain is the following: 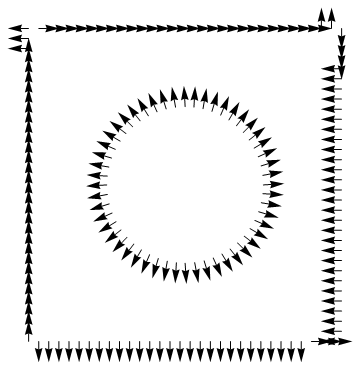 Now this is a huge turn off here - what is up with those messed up normals?

My main question is: how can I get for one boundary of the domain the list of correctly paired data?

P.S.: you can check manually for examaple (just to show it's not an issue with the graphic projection):

So the "normal" is actually a tangential vector in that point!

Let's say you have the following boundary mesh:

But how can I pair them together? boundary point <-> its normal?

Points don't have normals, only edges do. An edge element is made up of two coordinates, and some coordinates belong to two different edge elements with normals pointing in different directions.

Nevertheless, we shall see that it is possible to associate coordinates with boundary normals in some sense.

what is up with those messed up normals?

You are implicitly assuming that the first vector in the normals list is associated with the first coordinate in the coordinates list, and this assumption turns out to be wrong.

how can I get for one boundary of the domain the list of correctly paired data?

The documentation shows how to do this, specifically ElementMesh -> Scope -> BoundaryNormals. Each boundary element is a line with two coordinates: {pt1, pt2}. To retrieve these coordinate pairs, we use 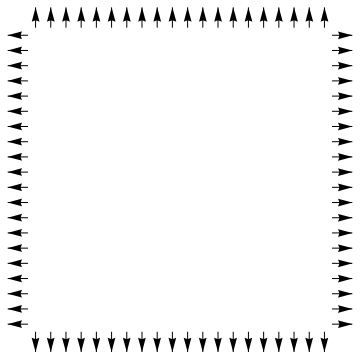 Since you want to associate each boundary normal with an existing coordinate, you could choose either the first coordinate in the coordinate pairs, or the last:

You can plot these with

and you will see that the arrows are very similar, but shifted just a little bit. Instead of positioning them in the middle of the edges we have positioned them directly at incident coordinates. This is as close as we can get to associating boundary normals with coordinates.

I believe this has to do with mesh element blocks, which are documented under ToElementMesh -> Options -> MeshElementBlocks. For example:

but using a sublist is a smart design choice anyway because it leaves open the possibility that mesh element blocks for boundary elements can be added in the future. And it's good for consistency with the mesh element properties anyway.

9
Orientation of boundary domain normals
5
How to find the direction of the outward normal in a point of the boundary of a 2D region?

1
Generating a boundary mesh from a list of points
3
How to generate 3D FEM mesh with inner points at the boundary
1
Extract boundary points from BoundaryMeshRegion
9
Orientation of boundary domain normals
5
Curved mesh boundary from space curve
8
How to mesh a region with inclusions touching the boundary
8
How to refine a boundary mesh with MeshRefinementFunction?
11
Stokes equations in 2D with traction boundary conditions