Generating a range of numbers according to some rules

I'm pretty new to Mathematica, and I'm mainly a programmer so I don't have a lot of knowledge about maths.

I want to generate a set of UNIQUE incremental numbers (series) according to the following rules:

EDIT: The actual situation that makes me think I need this is:
I'm simulating a slot game where you can win an amount of money each spin, I get a long list of all the wins and their frequencies, now I want to "redistribute" or "group up" those range of wins into a smaller set, for example only 5000 numbers instead of having like 1M, I want to do that by basically generating a series as specified in my question and then "grouping" each of the real wins into the closest number in the generated set, so for example 0.9, 1 and 1.1 would be grouped into just 1 with frequency 3 (assuming that 1 is in the generated set of numbers)

EDIT: Now that my question has been answered, my next step should be:

I can do this in code easily but I'm sure there must be a way to do this in Mathematica? Should I post this as a new question? I don't want to spam

This might put you on track. Say your range is 1 to 50000. We can weight these in quartiles so that the first ones have 50% chance of being selected, 30% for the ones in the next quartile, etc. Then form a random sample without duplication using weighted RandomSample. Last sort so the result is ascending. Below is the code for this.

To check the quality I'll bin into quartiles, then find the length of each bin.

Let's get the respective fractions.

Here is approach that doesn't rely on random numbers but instead generates a completely deterministic sequence of numbers that tracks the desired distribution optimally.

The distribution given in the example can be written like this, assuming all numbers are in percent: 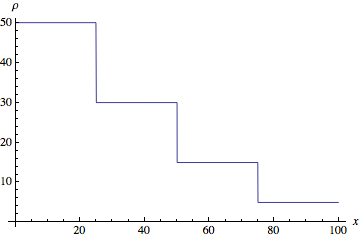 Now I generate the desired numbers in a list called spacedOut, with a length of 5000 entries: 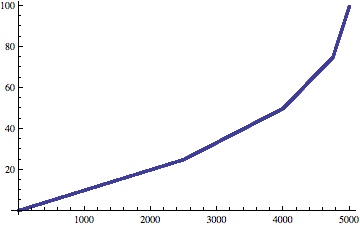 To check that we got the desired result, look at the number of values and their percent distribution:

The last line shows that the distribution is spot on, without having to rely on the law of large numbers in a random process.

Basically what I did in the NestWhileList was to construct the inverse of the integrated distribution in a discretized form. Or in other words, I used the relation $\Delta y = \rho(x) \Delta x$ where $x$ is in the interval $[0,100]$ and let $y$ increase in constant steps to calculate successive values of the corresponding $x$. The total number of steps is predetermined by calculating the integral of $\rho$ over the whole interval $[0,100]$ and adjusting the step width dx accordingly.

Therefore, the values in spacedOut will all lie between $0$ and $100$, but with a varying spacing to create the correct distribution.

This approach doesn't require a piecewise constant distribution. The function $\rho(x)$ can be an arbitrary distribution.

Not the answer you're looking for? Browse other questions tagged probability-or-statistics random distributions or ask your own question.