I have a list of points {{t1-0,t2-t1}....} which are differences of time of a repeated experiment which gives t1's and t2's times. I have plotted the data to see if they have some correlation and gives me the following plot: 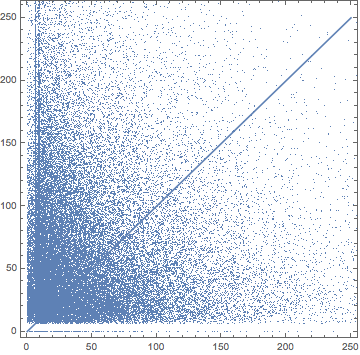 It seems they are correlated. I would like to plot these data colored using a color indicating the concentration of points. For example, from more concentration to less concentration, dark-red to dark-blue (similar to "Rainbow" color style, and a bar legend at the right side. I have been testing several options and web pages, but I can not figure out how to make it. I would rather like to ask, if possible, how to remove the frame and the ticks but leave the axes numbers.

Thank you very much for your help

The word "correlated" is many times used to suggest some sort of statistical dependence of one variable on another (especially outside the field of Statistics). But there are many forms of "statistical dependence" so no summary statistic like a correlation coefficient always gives an adequate picture of what's going on. Hence, one looks at a variety of forms of dependence. Fortunately you seem to have lots of data which gives you a lot of leeway (but also the potential for more complication).

One aspect of "statistical dependence" is that if there is some sort of dependence, then the distribution of values for one variable will depend on the values of another variable. So with lots of data we could look at a few histograms where the range of one of the variables is restricted. Here are two such slices: 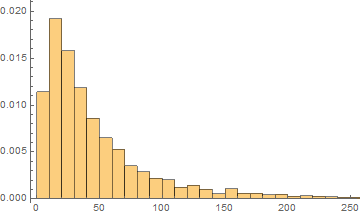 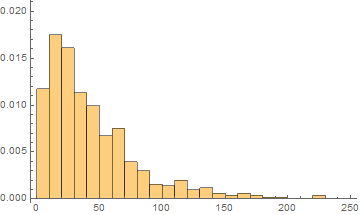 An alternative is to use some sort of Generalized Additive Model (gam) (which is a nonparametric regression approach). While some folks have created their own gam packages in Mathematica, there is no built-in Mathematica function to do so (yet?). A very, very crude approximation is to take slices across one of the variables and calculate the means of the other variable for each slice. Then plot the means with the data in the background. 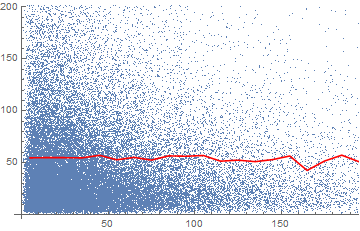 Here, too, there does not seem to be evidence of the vertical variable statistically dependent on the horizontal variable.

16
How to add a common color legend to a grid of density plots?
1
2D scatter plot with colorbar legend and point size variation
1
Adding a second color bar to a plot
7
Legend displaying the expected number of points per unit area next to density plot
0
Discrete Plot Custom Color Individual Point Coloring