Getting the front sign of an expression. Positive or negative for formatting only

This is for the purpose of generating a string (actually it will Latex string, but that is not important).

I need to generate string as

Which is meant to add/combine the two expressions (not mathematically add them, but just to format them on the line, as part of equation). This is part of of the RHS side of an equation.

The thing is, expression is an input argument which I do not know what the front sign on will be. So if the function writes

And the expression happened to be -x then it will come out as z + - x. And if the function instead does

And input is just x then it will come out as z x which is wrong, as it look like multiplication. It should be only a + or - between them.

Getting the sign turned out to be more tricky than I thought, since the input can be any mathematical expression and FullForm is needed to figure the sign.

So by trial and error, I think I got all the cases covered in the function below, which takes expression and tried to figure if it should add + or not to it.

My question is, is there a better way to do this? I am sure there is, as it seems too much work for something like this. (some might not like the use of Return, but if I do not do this, there will be too long if/then/else chain, and Which does not help much here, any way, the style can be changed).

To test the above: 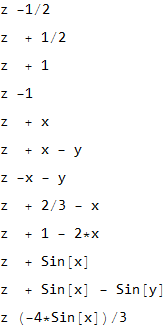 Why do you need to use both TeXForm and InputForm? If you're interested in ending up with a latex string, perhaps you could use something like:

Maybe this is too simple to handle all the real cases, but it seems to work on your test cases. 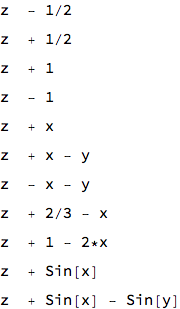 Not the answer you're looking for? Browse other questions tagged expression-manipulation parsing or ask your own question.

7
Using MatchQ (or other means) to parse an expression using sums of COS or SIN correctly
10
What is the correct way to use specific rule for specific pattern match when parsing an expression?
3
Finding coefficient in expression
4
When does Mathematica insert parenthesis into expression?
5
How to determine if RHS of first order ODE is separable or linear or neither? Parsing problem
5
Separate or order the positive and negative terms of an expression
2
Taking Head of function in operator form (and manipulating arguments in operator form)
1
Convert String in Expression to Integer