I want to perform a calculation over a region that is an isosceles triangle with a circular segment attached to the base. The region generalises a circular sector, where the apex of the triangle is not necessarily the centre of curvature. I use:

(Explanation, for completeness: t0 is half the apex angle, ct is the "contact angle" between the base and the arc, and the slope sides are unit length. The triangle is on its side, so the base is to the right. I find the intersection between the full circle and an oversize triangle to chop off those parts of the circle that are outside the required region, then I take the union of the result with the correctly-sized triangle otherwise I lose the apex in some more-curved cases.)

RegionPlot shows me the shape I was expecting: 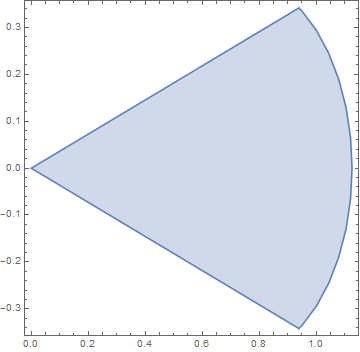 Now to generate a mesh and take a look at it:

and it looks fine: 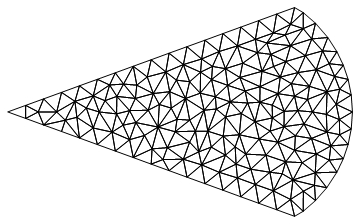 But, if I change the contact angle ct slightly from 57 to 55 degrees:

and repeat with everything else unchanged, I get the expected RegionPlot (almost the same as before) but a defective mesh: 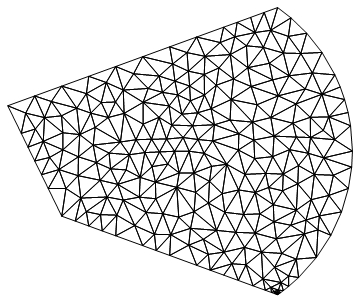 Try again with ct half way between, 56 degrees, and Mathematica hangs for several seconds before the kernel kills itself!

I found quite a few cases of this kind of behaviour, for unpredictable combinations of parameters.

I'm assuming this behaviour is a bug. (If not, why not?) Are there ways to reliably avoid it that don't have their own unpredictable sets of problematic parameters?

Well that's a bit odd. Someone posted an answer to my question yesterday, but it's disappeared without trace. At least I can't see it below my question today, whereas it was there yesterday. It was just some code, with no explanation or commentary.

Anyway I did make notes and, for the benefit of anyone who may find it useful, the missing answer simply replaced the last line in my example with:

I found the assignment to MaxCellMeasure to be unnecessary and it's "BoundaryMeshGenerator" that does the business. According to the documentation for ToBoundaryMesh, the default "Continuation" method is supposed to be better at resolving corners and cusps (not in my case!) while the "RegionPlot" method (used above) is faster but worse at corners.

I believe there is a bug with the "Continuation" method and for now I must forgo the advantages it should offer, but at least I can make progress with the workaround.

To whoever posted the missing answer: thanks, and I'm sorry I can't up-vote it. Of course if it was deleted because it was defective in some way then I'd like to know, though it looks good for now. Otherwise - why did a useful (and inoffensive) post simply vanish?

Not the answer you're looking for? Browse other questions tagged regions finite-element-method mesh or ask your own question.

1
Generating a boundary mesh from a list of points
10
Numerical instabilities of a convection-(non-)diffusion equation when shrinking from a square to a triangular domain
10
AceFEM: Conversion of triangular to quadrilateral mesh
6
Automatically generating boundary meshes for region intersections
1
How to apply $\overline{r}(x,y)$ to shapes with straight lines or absolute values?
1
How to find area of intersection of disk and cone?
6
Inconsistent mesh generation from BoundaryDiscretizeRegion and ToBoundaryMesh at creases
3
Creating a domain for NDSolveValue via ParametricRegion
10
Generating Mesh of Rotated Graphics