How to judge if two Dataset are equal

I don's sure this is a bug or not.Suppose I have a dataset

Then we do two same operation on it. 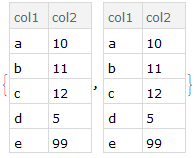 As we see,we get two data set totally.But in some time,we can not judge it just by our eyes.Let use == or === to test it. 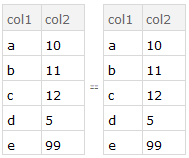 The difference is in the "ID" part of the FullForm of the datasets, not in the data. So, if you want to compare the data portion, you can use the function:

We can test it on the datasets provided in the OP:

Not the answer you're looking for? Browse other questions tagged dataset expression-test or ask your own question.

16
Can't get Append to append a record (association) to a dataset
11
10.0.2 breaks a recursive "trie" query
6
when two associations are equal?
13
Dataset Processing: efficient ways to clean and merge sets for Life Sciences
12
Creating a Stock Dataset
16
How to work with a Dataset?
0
Truncation of Labels and Data when visualized as Dataset
1
Trying to check if two expressions are equal