I have a few GPU/CPU 'loaded' Linux boxes in my lab, used largely for rendering. I want to compare the new 11.1 Neural Network stuff to some Tensorflow things we do here. Of course, since I have all that iron back there I want to use it.

I don't want to have to actually walk all that way, and besides, they are headless (or head-impaired).

I haven't tried using remote kernels for anything other than Parallel stuff in quite a while (like, 1990 or so, with a Cray). I've noticed that the 'Basic' settings in Evaluation->Kernel Configuration Options ... don't work so I had to go and manually get a connection to happen, thanks to this answer I was able to cobble something together that works. 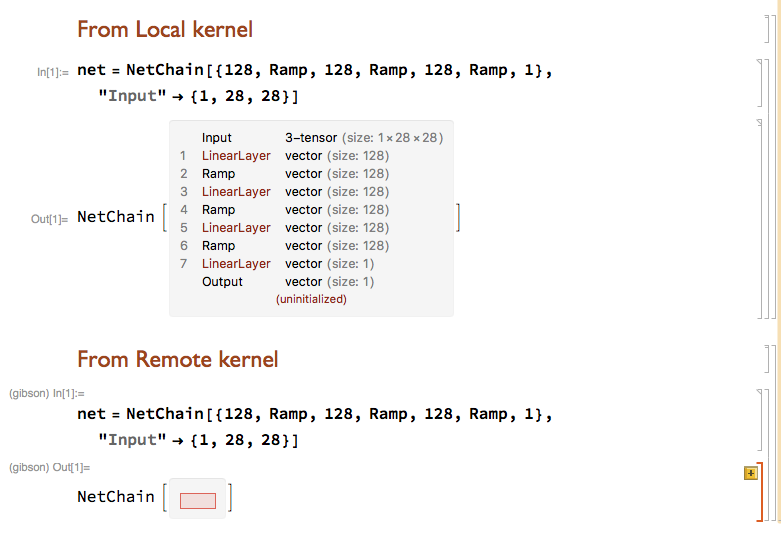 The resulting NetChain isn't formatted when returning from the remote kernel. The error -

makes a little bit of sense, spelunking the thing returned -

suggests to me that there are things that don't get faithfully interpreted by the front-end's kernel when they come back from the remote.

This wouldn't be a problem, other than I would like to run the learning remotely and observe the progress on the front end. This is further reinforced to me by the fact that, if I cut-and-paste the 'red-box' output from the remote-kernel'd notebook into a local-kernel notebook, it renders properly.

Any thoughts on how to get the local notebook kernel to jibe with the output of the remote kernel?

5
How to connect the front end of one raspberry pi with the kernel of another
7
Error occurred while connecting to remote kernel.Can't use dynamic

17
Connecting to and disconnecting from a continuously running kernel, on demand
22
How to connect to EC2?
5
Reconnecting to remote kernels through SSH tunnelling
4
How to evaluate an expression via `LinkWrite` when the expression is only known at runtime?
5
Cropping in neural networks
3
Running Mathematica on a Remote Machine (using frontend and ssh)