Why don't Part, Apply and other standard tools work with Region objects? [duplicate]

Consider the following discretization of a region object: 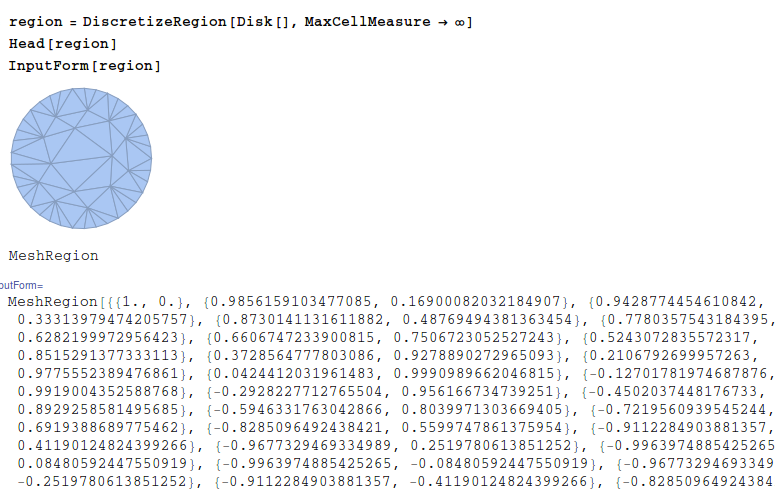 By all appearances, this has created an object region with Head MeshRegion and which contains a bunch of points, then a Polygon object, and other stuff inside.

I am trying to manipulate regions of this kind using standard mess-with-the-code techniques, but they're proving surprisingly ineffective. Consider the following ways to get at the juicy interior:

What's going on? I might expect this kind of thing to happen with objects with HoldFirst or HoldAll attributes (so their internals are a bit weird and they do some nonstandard handling), but MeshRegion's only attribute is Protected, and under InputForm and FullForm region looks exactly like every other expression. How do I get to those juicy internals?

I thought this would be obvious, since we're all grownups, but just to be clear: I'm not asking about WRI's design reasons for making the language behave like it does, which is obviously a question for WRI instead of this site. I'm asking about what features of the language cause some expressions, which can have intricate an intricate internal structure evident through InputForm or FullForm to make that internal structure unavailable via the normal language tools, where they are represented in the documentation, and how I can use the language to tell whether a given expression will behave this way.

Not an answer to your question how to test for this behaviour, but I thought you might find it useful to have a way to programatically access the internal structure of the MeshRegion you used as an example.

This works as follows:

Now you have access to the internal structure, and you can use Part on deAtomized like here:

As pointed out in the comments, MeshRegion objects are "atomized", which is not particularly well described in the documentation, as mentioned in an earlier question and more importantly this other one. This can be brought to the fore via

where AtomQ is a function which

yields True if expr is an expression which cannot be divided into subexpressions, and yields False otherwise.

or in more detail

This is briefly mentioned in the documentation for MeshRegion, which states

MeshRegion is always converted to an optimized representation and treated as raw by functions like AtomQ for purposes of pattern matching.

That still does not explain why MMA is unwilling to break up the expression when explicitly told to do so (via e.g. Applying a different head to it), though in that sense it does behave like some other 'atomic' expressions, such as

but not others, such as

The bottom line, it seems, is that this is for performance reasons which are not particularly well documented.

Not the answer you're looking for? Browse other questions tagged expression-manipulation regions core-language or ask your own question.

15
How to extract something from DelaunayMesh and similar family of functions
31
List of atomic expressions
11
Why is Graph an atomic expression in Mathematica?
3
Why is MeshRegion atomic?
50
Scan vs. Map vs. Apply
17
Is it OK that SameQ considers expressions identical, although they have different structure?

10
Why can't a string be formed by head String?
5
Changing the definition of N: unexpected $RecursionLimit::reclim error
6
Replacing Or with List
1
Smooth region boundary
1
How can I ask the Wolfram Language to tell me if a hypothetical expression with a particular head would be atomic or not?
1
Question with Integrate and Region
1
How do I properly define and work with region unions?