How to work with a Dataset?

I have an application for which a Dataset appears useful. I want a structured dataset which consists of a set of records, which are presumably Associations.

For the data set, I would like to be able to perform the following operations:

I generally want to perform these operations in place.

I have read and re-read the docs on this, and I am still confused. In the code below you can see some attempts. (I deleted the output because the grid forms don't usually look good in a posting.)

First, I construct a dataset in two different ways. The first way is to create an empty dataset and append records to it. The second way is to construct the dataset immediately containing the records. These two constructs have the same Normal, but they are displayed differently.

In the second section, I try to add key-value pairs to one of the records. My method does not work.

I am also not sure whether a Dataset or a list of Associations would be best.

Anyone who could point me in the right direction for this would be greatly appreciated!

There are two issues under discussion: 1) the distinct dataset visualizations for the same data and 2) ways to update dataset subelements in place. We will discuss these separately. 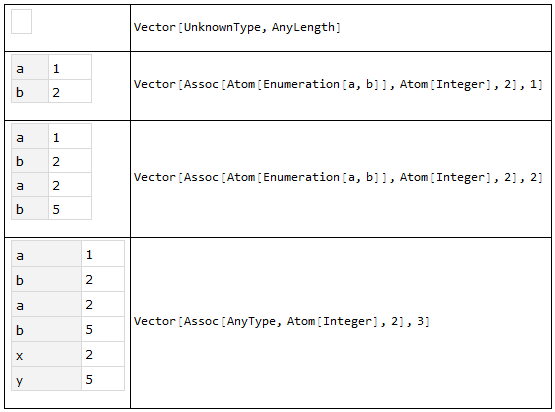 The principal data type is a Vector of Assoc. The last row shows how adding the incompatible keys "x" and "y" switched the key type from Enumeration to the generic AnyType.

Now constrast this to db2:

The principal data type is now a Vector of Struct. A "struct" represents the case when the dataset is known to contain associations of consistent type. It deduced this at the time that db2 was constructed.

In the case of db which was built incrementally, the type system infers the final data type from a combination of the initial data type and the type transformations of any applied operators (e.g. AppendTo). Such type inferencing is generally less specific than the type deduction that occurs at construction time. We can use Dataset as a query operator to force reconstruction of a dataset and thereby deduce its data type anew:

There are presently very few ways to update a Dataset in place. See, for example, the discussion in (54491) or the work-around sketched in (141916). In particular, the kinds of update contemplated in the question are not presently supported.

The way to achieve such alterations presently is through query operators. For example, we can append a new key "c" to element 1:

Note that by adding the key "c" to only one of the associations, the data type switched from Assoc to Struct and gave us the vertical key/value pair visualization we saw earlier.. If we had added "c" to all assocations, we would have retained the Struct tabular visualization:

The closest thing to updating a dataset in place is expressed as db = db[...ops...].

It is possible to update a simple list of associations in place:

Beware that performing large numbers of incremental changes to datasets will likely get progressively slower. This is the dataset analog to repeatedly applying AppendTo to a list, a strategy which exhibits a slow-down proportional to the square of the length of the list. The dataset infrastructure is best suited for operators that are applied to significant subsets of the dataset all at once (e.g. one or more complete columns).

Thank you both for the comment and the answer. They were very helpful. From them, and the postings referenced in the answer by @WReach, I came to the conclusion that a list of associations would best serve my purpose.

Here is what I came up with for functionality. (I deleted output because the association forms aren't very readable outside the Frontend. )

38
Error changing Dataset using Part
44
Dataset vs an association of associations
37
Visualizing Type System Operations
5
Delete column from a dataset in mathematica
9
Why are empty lists not consistently formatted in a Dataset?
2
ScientificForm in Dataset
4
Unstable Dataset Formatting

5
What are the Slot Names in a Dataset?
9
How to insert zero counts uniformly with Dataset Counts query
4
How to get data from DB into dataset with keys
44
Dataset vs an association of associations
8
Group by multiple keys, merge at specific keys in dataset
2
Question on combining 2 datasets with common key
2
on display of DataSet using list of associations. How to make header layout independent of order in list?