at first, i would like to thank all the people here. i'm working with mathematica for half a year now and always found great advice and tricks.

now, i came up with a problem i couldn't find a solution for. from a file, i import a string with around 23 mio. characters which is reasonably fast (it acutually is a dna sequence). i then want to split this string into its characters and convert each of them to an integer number.

my first, naive approach was the following:

which creates the following output:

as you can see, the timing is quite good but the memory usage during the process is horrible. my next approach was reading from a stream and convert each character to an integer instantly:

as yo can see, this approach needs way less memory but takes considerably longer. my question now is, if there is another memory efficient way to do this which is faster than my second try?

This seems to take little memory

but twice as long as

Compiling the first solution makes it faster than the second

OK, we don't need command-line tools for this. We can do better, faster and with less memory.

The trick is to make the conversion parallel on all data and to keep packet-arrays. First we define a parallel, compiled function which does the conversion for one character:

Yes, those Ifs look pretty awful, but they get compiled down while Switch or Which doesn't. See, that we don't read characters, we read the ASCII codes instead which is a nicely packed integer array:

Here this takes 2 seconds and less than 500 MB of memory.

I timed all methods on my machine. I really don't know how image_doctor got his method so fast. It was the slowest here (native Linux, SSD, Intel i7 extreme, 32 GB Ram). I didn't preload the data. If a method used a string, I used Import. 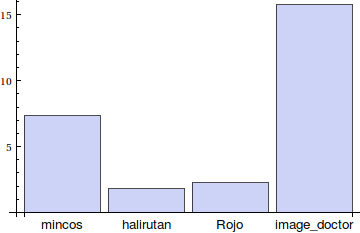 I thought, that it's Rojos Piecewise construct was faster, but as it turns out this was cosmic radiation since the ugly nested Ifs and the Piecewise solution produce exact the same compiled code. The full test code consists of a sequence of only 3 million digits

Rojo compiled to "C" and parallel

Note here, how mystical it is, that Piecewise (and Ifs with then branch (!)) get compiled correctly to "C", while Switch and Which stays in a MainEvaluate call.

I read 30 million characters stored in around 10,000 lines in a text file into a list of integers like this.

The 0.93GB is effectively the space required for the 30 million integers. I guess this storage amount could be compressed if required as the underlying alphabet only has 4 symbols.

On my PC, using a lookup table is slightly faster than @halirutan's If or Piecewise method.

If you don't care what the function returns for characters other than A,C,G,T, this is even faster:

Though not quite as fast as Rojo's second method this is a little shorter and uses less memory on my machine:

You could also read your data as bytes to bypass ToCharacterCode like this:

However, his new compiled form is as fast and uses much less memory.

This should be even better in Version 8 with the enhanced Compile.

Not the answer you're looking for? Browse other questions tagged import string-manipulation or ask your own question.

3
Convert String to List of Numbers
5
Removing commented lines of text in a string
13
ToExpression fails with long nested string expressions
14
Built-in way to convert Integer to Ordinal String
9
How to convert string to integer list?
13
Convert elements of list to string
6
How to convert a string into a structured list
5
Convert number to string
5
Convert String to Integer from a huge string database in a very fast way?
1
Convert string to executable code