Measuring the chaoticity (unpredictability/fractality) of a 2D plane

I have several data files containing three columns x, y, clas, where x and y are the coordinates on the configuration plane, while clas is an integer indicating the final state of the initial condition. If we plot each initial condition with a different color, corresponding to the particular final state, then we can obtain an interesting color-coded diagram. In my case there are only five possible final states: 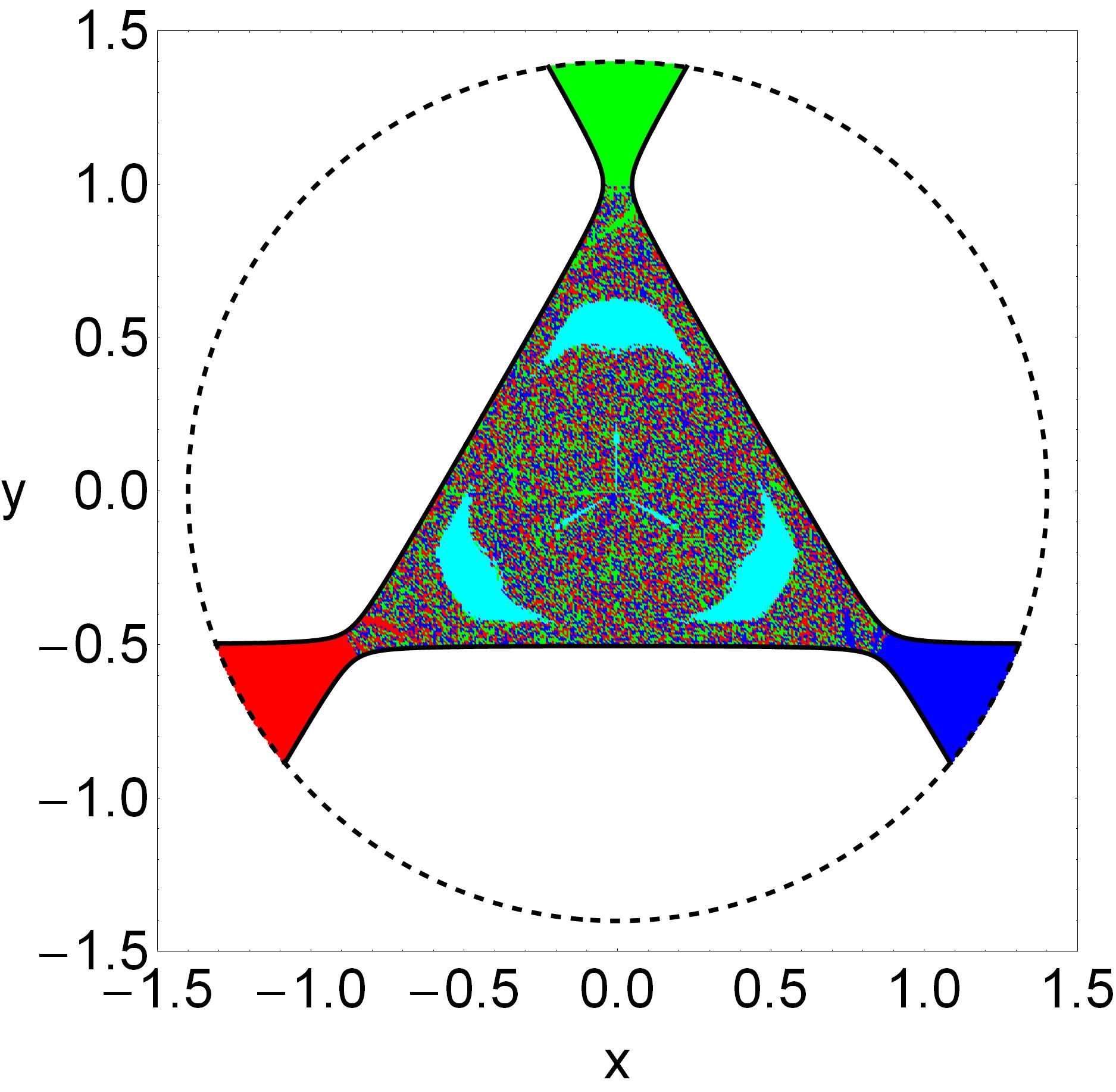 It is seen that in the central region there is a highly complicated (fractal/chaotic) mixture of escaping orbits. 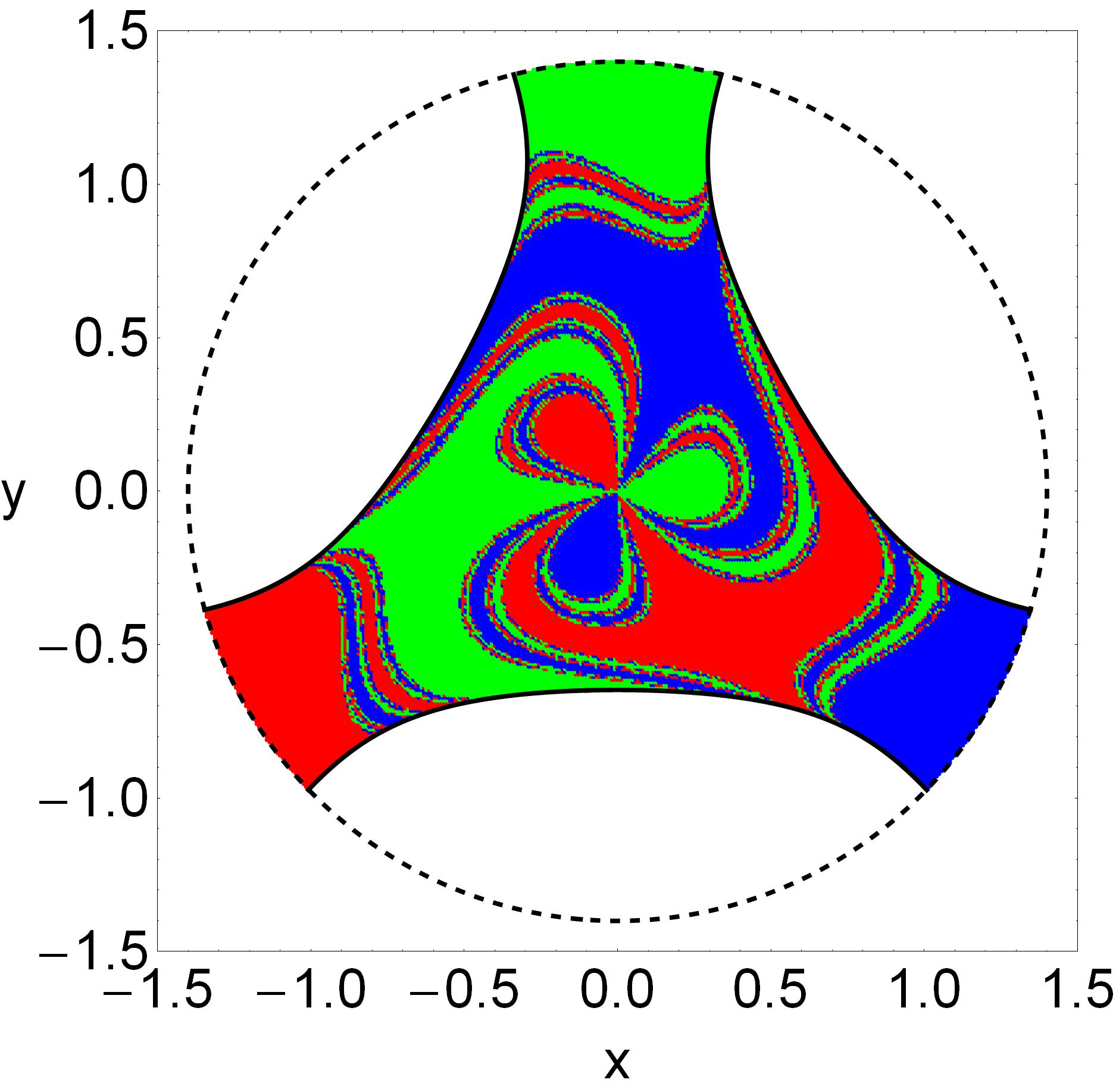 Now the central region is occupied by extended well-formed basins of escape. By the term "basin" we refer to local sets of initial conditions that lead to the same final state.

Obviously, in the first case it is very difficult, or even impossible, to predict the final state of the initial conditions located in the central region, while in the second case the same task is much easier.

My question: Is there a way to load the data files (with the three columns) into Mathematica and somehow compute the degree of unpredictability/fractality/chaoticity (name it as you want!)? In other words, I want to scan the data files and determine how randomly (or not) the several final states are distributed on the configuration (x,y) plane. The computations should produce a number.

Is this task doable? Any ideas?

Many thanks in advance!

How to create the color-coded diagrams:

According to the method proposed by bill s, we can determine the areas on the configuration (x,y) plane where the unpredictability, regarding the final state, is high. 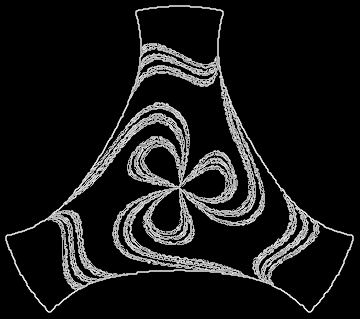 The white areas of the above diagram are the regions of high unpredictability.

Question: How can we create a new list, let's say data2, containing those initial conditions of the original data file, which correspond to the "white" areas?

Since you presented the question in a visual manner, perhaps an image-based answer might be useful:

Taking the gradient of the images yields images with white where there are lots of changes and black in regions that are relatively constant.

Now counting the white areas in the two filtered images gives a measure of how much change there is in each image.

Since the quantity of interest is the percentage, we can create binary masks:

Now we can calculate

which shows that about 48% of the first one and 22% of the second are in regions where the behavior of the system is unpredictable.

Of course, one could substitute other filters: StandardDeviationFilter might make more statistical sense.

Not the answer you're looking for? Browse other questions tagged list-manipulation data fractals or ask your own question.

61
Measuring fractal dimension of natural objects from digital images
2
How do I find the maximum value from the given set of data?
2
How to plot on complex plane with Mandelbrot set
7
How to smooth the noise
4
Measuring multiple incidences of a continuous constant in a list
0
Plotting plane from a matrix or data table
3
Find the central point in each Sierpinski triangle