I'm simulating temporal data of soil moisture $s(t)$ at a daily time scale by generating a random function with a compound Poisson process.

Where the occurrences of rainfall events are modeled using a Poisson process (and therefore have exponentially distributed inter-arrival times with a mean of 6 days in this case) and the depth of each rainfall event is also sampled from an exponential distribution with mean 15 mm/event. The RandomFunction simulates the process for 10000 days.

Between rainfall events (drydown), soil moisture decays through evapotranspiration through a function $\eta*s(t)$ where $\eta$ is the rate of evapotraspiration loss per unit ground are and in this case is 5 mm/day.

It is important to mention that, since our simulation is at a daily timescale, rainfall events lose all their temporal structure. This means that, mathematically, those correspond to sudden "jumps" or dirac deltas.

All that is left is to solve the differential equation $s'(t)=\frac{1}{soil\ volume}[f(t)-\eta*s(t)]$ where f(t) is defined as the forcing function (in other words, when the rainfall events occur). To generate f(t), I do this: 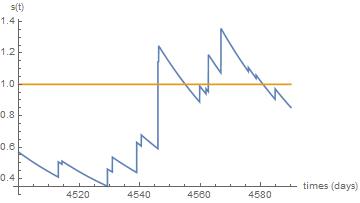 Of course, the volumetric soil moisture should always be a number between 0 and 1. In some case, it rains more than the soil can admit and, in real life, the additional water gets transported through runoff.

I'd like to use the event detection capabilities of NDSolve to basically limit soil moisture to 1. However, it seems like this method struggles in detecting crossings of jumps as shown here:

from which I get for my particular case shown in the figure above: 4555.09 and 4580.8 (2 crossings instead of the apparent 4). Those two times correspond to the times of down crossing (useless for my case) from above 1 to below 1. What I need is the time of up crossings to prevent soil moisture from exceeding 1. As you can see, WhenEvent overlooks up crossings committed by dirac delta "jumps".

Does anyone have a solution for this with or without WhenEvent?

How about a solution with more WhenEvents? We can use WhenEvent to simulate the rainfall process directly within NDSolve. Then we can easily keep an eye on ss[t] to make sure it doesn't exceed 1 (here I chop it with Min): 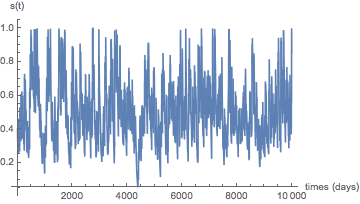 Not the answer you're looking for? Browse other questions tagged differential-equations event-detection or ask your own question.