I solved Laplace's equation over a square region. There are Dirichlet BC's (the top wall is fixed at 100, the other walls are fixed at 0).

Plotted result of Laplace's equation is below: 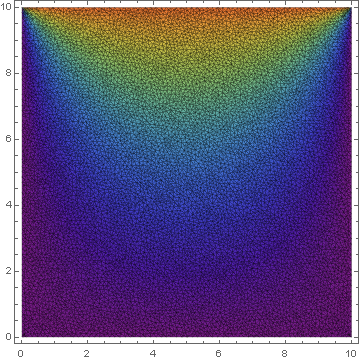 I took the gradient and plotted the result like this: 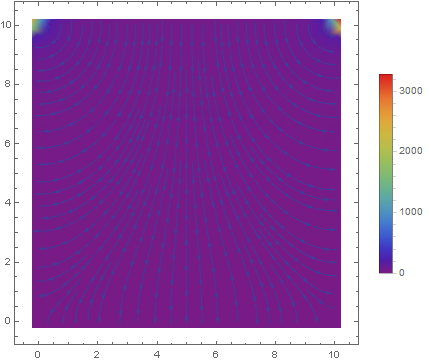 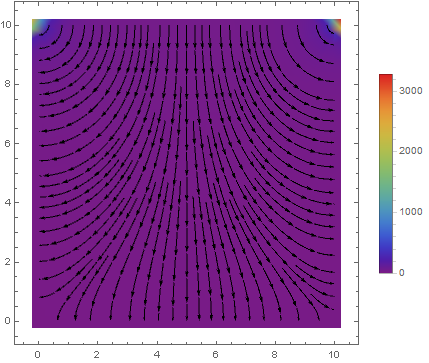 Does anyone know what makes me lose control over StreamStyle? It is important for me to use {x, y} \[Element] mesh because I have several solutions in which there are openings in the middle of a region. Using {x, 0, 10}, {y, 0, 10} puts streamlines over the empty region. I tested it on Mathematica 10.3.

This problem can fixed by just using Evaluate@gradientfield.

I get an error,

StreamDensityPlot::idomdim: {x,y}[Element]mesh does not have a valid dimension as a plotting domain.

But when I do this {x, y} ∈ square, everything works fine, 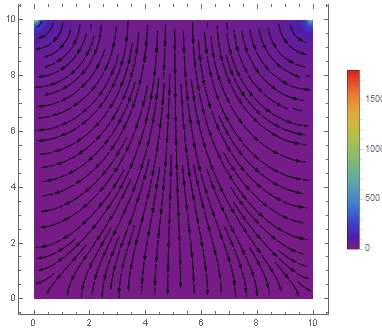 This question is linked here.

The issue is similar to the classic Plot draws list of curves in same color when not using Evaluate.

Plotting is one of the more dynamic areas of development in Mathematica, so this explanation is based on V11.1.

The initial source of the trouble is that plotting functions such as StreamDensityPlot hold their arguments, that is, the expression is what they get and not its value. In StreamDensityPlot, argument is used as is to determine its type and the subsequent styling of the plot. It probably should evaluate it at a numerical point in the domain, but that is not how it is currently programmed to behave. In OP's case, the argument is a symbol and not a vector and Length[gradient] is 0. This length is passed to a styling function, which thinks, "That's ridiculous, I'm defaulting to the default styling," if I may anthropomorphize.

Here a comparison of using the symbol gradientfield as an argument with passing its value with Evaluate@gradientfield.

In the OP's case, the styling function evaluates to an empty list, which is then replaced by the default styling of stream lines:

One can fix the problem with any method that passes the value of gradientfield, such as Evaluate@gradientfield. One can also use With:

However, passing the option Evaluated -> True has no effect. The option is not a documented option of SteamDensityPlot, but it is present among Options[StreamDensityPlot] and generates no errors.

The documentation of SteamDensityPlot discusses uses of Evaluate, but not this specific issue. From my own point of view as a user, even given the long-standing fame of the question linked at the top of my answer, I consider this an unnecessary constraint on usage (i.e., a bug).

The OP did not supply test code so I made this up:

91
Plot draws list of curves in same color when not using Evaluate
21
All curves in plot have the same style. Cannot be fixed with Evaluate[]
1
Neumann boundary condition for Laplace equation
1
Mesh does not have a valid dimension as a plotting domain in 11.0

8
How can I get better control over StreamPlot?
35
Calculating a potential function using the finite element method
8
Control PointSize on a ListPlot
4
Error control for NDSolve
5
NDSolve for optimal control theory
28
Numerical optimal control
1
Why is the solution of NDSolveValue asymmetric when the regions it's solving over are symmetric?
1
Control solutions returned by DSolve
4
Getting additional control over MaxRecursion/PlotPoints