Thickness destroys Dashing for some platforms/versions

EDIT: I posed this as a version issue but now I think it's (also?) an OS issue. Problem exists on both v10.1 and v11.0 on macOS Sierra, but does not exist on Mr.Wizard's post which is v10.1 (OS unknown), though Mr.Wizard claims to now have the issue as well.

While reading this post and the answer by Mr.Wizard I noticed a difference in plotting behavior between his version and mine that made me unable to reproduce his plot. The meaning of Thickness seems in his case to be the lateral thickness of a line (preserving e.g. Dashing), but in my case to be the omnidirectional thickness of each visual bit of a line (destroying e.g. Dashing).

The code in question (see our exchange in the comments on his answer):

Which in v.10.1 on Windows produced this:

but in any version on macOS Sierra produces this:

He also pointed out that using Directive does not change behavior on either version, i.e.

does not fix the problem.

So question: Is there a workaround for this? And is this really a bug or am I misunderstanding a new "feature"?

It seems to happen because the default line cap setting is CapForm["Square"]. This means that each line segment making up the dashed line will visually extend beyond their endpoints.

A fix that works on OS X is using

which ensures that the line segments only extend to their endpoints. 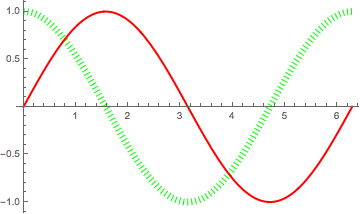 This fixed the problem on-screen, and in PDF or EPS export.

This answer is only for OS X. I expect that Mathematica may behave differently on other operating systems.

I got this response from Wolfram Tech Support that is also a good fix (but not as good as Szabolcs'), though I can't say I see the purpose of such a design choice:

"This is as designed. If you imagine an infinitely thin line extending from pt1 to pt2 and now add thickness in ALL directions you will find that at the end of the line segments the added thicknesses will interfere with each other. You can get around this using Dashing.

This will work in options such as PlotStyle."

Either use Dashing[Large] or specify values. 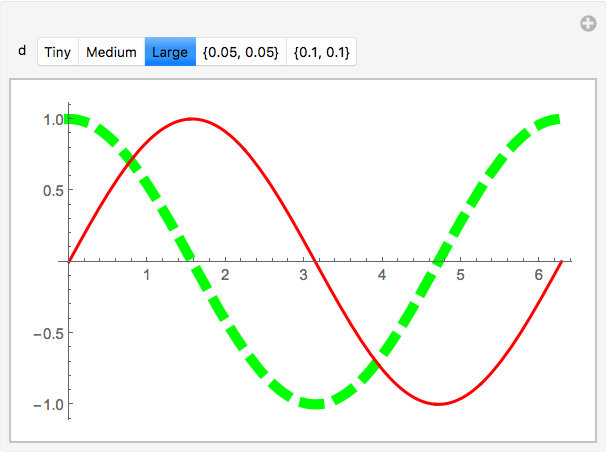 Not the answer you're looking for? Browse other questions tagged plotting graphics version-11 or ask your own question.

14
Increase 3D Graph thickness for 3D printing in Mathematica?
5
Thickness definition for ParametricPlot3D
37
How can I use Kenneth Moreland's “Diverging Color Maps for Scientific Visualization” in plots?
4
ArrayPlot: PixelConstrained doesn't account for Mesh thickness
3
Bug in LogPlot reintroduced?
0
ParametricPlot3D and ParametricPlot don't plot on my machine but do on other machines
1
Use dashing style and color as legends for Show
7
Red-green dashing instead of red-white dashing