I have encountered a problem with Mathematica that I really don't know how to solve. I'm sorry if I am going to be very verbose but I need it to explain the problem properly (and also make the code I'm going to show more comprehensible).

I'm using Mathematica to work for my master's thesis and in these days I'm dealing with the ecosystem model described in this article. Amongst the things I have to do there's the study of the eigenvalue distribution of the community matrix of this ecosystem, i.e. the jacobian matrix of the system of coupled ODEs that describe the population abundances of the various species, computed at the steady state of the system.

In a single sentence my problem is the following: as the size of this matrix increases Mathematica finds that it has also very small positive eigenvalues, while this matrix is always definite negative.

Now, with Mathematica I'm trying to study numerically the eigenvalue distribution of $\mathcal{M}$. The code I am using in order to do so is the following:

(I added the last two lines to keep track how many eigenvalues are positive and which is the largest eigenvalue).

However, problems start popping up if I set $m > p$ (which is the most interesting case for the model). In fact, the results of the analytical study of $\mathcal{M}$ (i.e. the fact that it's negative definite) are valid for $m \geq p$, but using the code I have written it happens that some eigenvalues start "collapsing" around 0, and they turn out to be both positive and negative (even if very very small in magnitude). The number of "collapsed" eigenvalues increases as the ratio $m/p$ increases, until they become the majority of the eigenvalues.

My question is therefore the following: is there something am I doing wrong in the code? Or is this just a problem of numerical precision?

I first thought it could be the latter, so I have tried to increase the numerical precision a bit by changing the third and fourth line of the previous code to:

However, new problems arise: apart from the fact that computation now requires a lot more time (I had to use much smaller values of $m$ and $p$ in order to get results in minutes) the eigenvalues are now complex, instead of purely real! For example, for $m=500$; $p=80$ I get figure $c)$ below.

Therefore, if this is indeed a problem of numerical precision, how can I fix it? Is there a more efficient way to increase it?

Here are the plots: 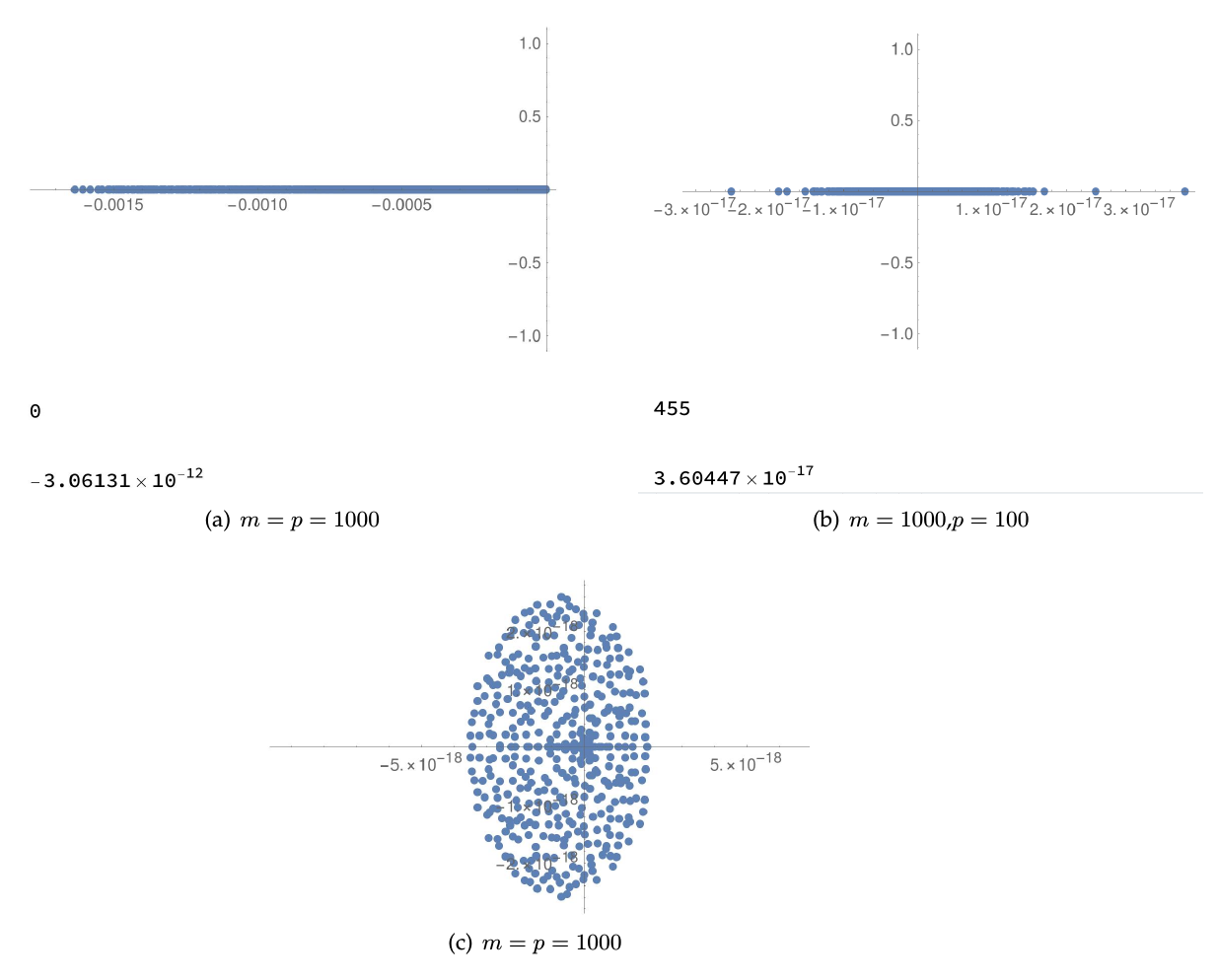 Sorry again for the verboseness.

Your first matrix is negative definite. Your second one has rank 100 and dim 1000x1000, so it is negative semidefinite. The smallest in magnitude eigenvalue for the first is around 10^(-11), so it is sufficiently distinct from machine arithmetic fuzz that it is not messed up by numeric error. The 900 zero eigenvalues in the second one are not going to be found as exact zeros by any numerical method, and that's why there is a fairly symmetric range of machine fuzz values appearing around the origin.

Not the answer you're looking for? Browse other questions tagged matrix linear-algebra precision-and-accuracy eigenvalues or ask your own question.

4
Negative eigenvalues of a covariance matrix

6
Should eigenvalues be ordered?
3
Is there a good way to check, whether a small value produced numerically is a symbolic zero?
10
Speed up construction of a dense matrix
12
Incorrect Left and Right Eigenvectors in Mathematica
5
Checking if a symbolic symmetrical Matrix is negative definite
5
Speed up selecting positive eigenvalues repeatedly
3
Proving the positive semidefiniteness of a 6X6 symbolic matrix
2
In NMinimize, how to incorporate constraints on positive semidefiniteness of a matrix which is not the matrix variable being optimised?