GeneralMiniMaxApproximation - Dividing out the zero

MiniMaxApproximation is used to generate minimax approximations. I'm interested in the "dividing out the zero" trick.

The documentation discusses a nice example. Suppose we want to construct a minimax approximation of $\cos (x)$ on $x \in [1,2]$. Since the function MiniMaxApproximation uses the relative error the function being approximated can not have a zero in the interval of question ($\cos(\pi/2)=0$). However "it is still possible to deal with such functions, but the zero must be divided out of the function and then multiplied back into the rational function". So instead of approximating $\cos(x)$ we approximate

The mathematica code to do this is

as in the documentation. I was wondering if there is a similar trick that can be used with GeneralMiniMaxApproximation. This function approximates parametrically defined functions of the form $(x(t), y(t))$. Note that $\cos (x)$ on $x \in [1,2]$ can be defined parametrically as $(\arccos(t),t)$ where $t \in (\cos(1),\cos(2))$. So the mathematica code to approximate this function looks like

However it fails because of the zero occuring in the interval of approximation. I was wondering if there is a way to extend the above trick so that it will work with GeneralMiniMaxApproximation??

I would like to stick with using the relative error as opposed to the absolute error.

But this does not work for some reason. It complains the weight function $t$ could be disappearing. But this is not the case since $t$ is positive on $(\cos(1)+1,\cos(2)+1)$. Any ideas why this doesn't work?

Well, since I rarely grab a chance to post an answer in this site I decide to enlarge my comment above XD.

In general, the error you encountered is nothing to do with your trick for getting around zero, it's just because $cos(t)$ in $[1, 2]$ is monotone decreasing: 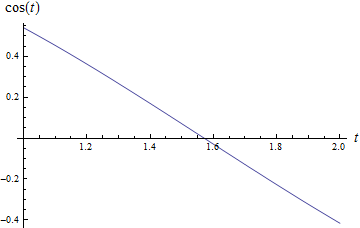 I.e. Cos[2] is the minimum and Cos[1] is the maximum, while the syntax for GeneralMiniMaxApproximation mentioned in the introduction of Function Approximations Package is:

So your trick will work if you exchange the endpoints: 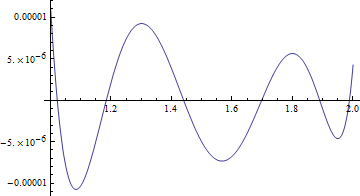 However, there's still a mystery leaved: after some trial I noticed that the order of the endpoints is not necessary for Plot ParametricPlot PolarPlot at all, and in fact the description for the syntax in the page for GeneralMiniMaxApproximation doesn't mention the order, too:

I'm not sure in which case the order is vital… personally I suggest the order should always be paid attention to, since the help doesn't explicitly mention that the interval in Plot etc. can be reversed. Looking forward to an explain from someone more knowledgeable!

Not the answer you're looking for? Browse other questions tagged functions approximation or ask your own question.

1
Calculating error of the approximate formula in calculations
15
Building a continued fraction
1
Double arguments and place of the underscore
2
Obtaining minimax polynomial from an interpolation function
12
Approximation with radial basis functions
0
How to boost the performance of a function that approximates a 3D object
4
Higher order Around, for large error propagation