I would like to efficiently construct all lists subject to certain relations. For example, I have the following "root objects" and rules:

If the pattern isn't clear, I'm essentially looking for all three-element lists such that successive elements are "allowed" by the rules. You may think of it as all length 2 traversals of a rooted tree of height 2.

This is a very simple toy example. I would like to be able to deploy this algorithm on "root objects" and rules which will lead to several dozen millions of lists, through perhaps 8-10 bouts of rules (the example above had only 2). I have an algorithm that can do this, but it scales very poorly and I'd like to rewrite it.

Is there a built-in Mathematica function that can handle this efficiently? I've been playing with Distribute and Thread, but couldn't quite get them to work.

Thanks for your help! 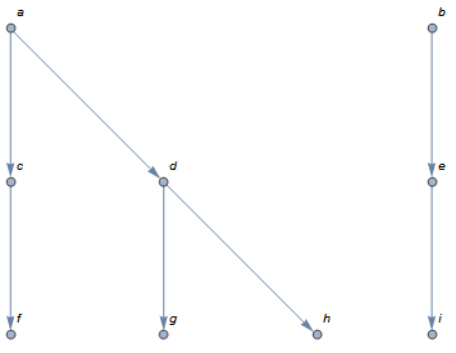 Find all path from source vertex to sink vertex

In version 10.1 I do not have WeaklyConnectedGraphComponents so here is a try without it:

Not the answer you're looking for? Browse other questions tagged list-manipulation replacement trees or ask your own question.

9
Is it possible to compute with the trapezoidal rule by numerical integration?
6
Conditionally replace rows in lists
10
Find positions of items in a list based on neighbours
3
Generating increasingly longer lists from a single list
2
Assigning sections of a matrix to lists based on row value
8
How to construct a tree from a notebook?
3
Find the length of the intersection of two lists including duplicates
6
How to efficiently compute all trees with n leaves and 2n-2 nodes
13
How to invert MapIndexed on a ragged structure? How to construct a tree from rules?
4
How to combine a lists of two lists with a list of two lists of lists of varying length?