There is a maple code for the bouncing ball on the given curve.

I tried to make this animation by using Mathematica

Why does the following code not work?

There are two problems with the original post, both can be solved by referring to the documentation for handling discontinuity events:

1) As described under Changing State Variables section, the change in multiple state variables should either be attempted through a single rule with a list of variables or through multiple rules. Multiple rules have the nuance that the value of the first variable is set first, so the next rule will use this new value. To avoid this (and this is what the Maple example is doing through temp variable), we should use the single rule: {{x'[t], y'[t]} -> Evaluate[vreflect]}. A function used in both answers does the same, but this is shorter and less confusing.

2) In the subsection Event Detection Methods, there is a quote relevant to the problem:

Note, that this is also the reason why anderstood's solution produces different results from Maple -- it simply misses the discontinuity events and falls through the terrain later. With the "IntegrateEvent"->True, the behavior is exactly as in the Maple example.

So, the updated code is:

The code won't work well for the lower values of c, but this can further be resolved by adjusting other parameters of the NDSolveValue or WhenEvent. For example, once the event has been detected, its location has to be determined. The "LocationMethod"->"StepBegin" works a little better than default "Brent" method, but further fine tuning is needed for very low values. Potentially, this can be solved using other equations of motion (i.e. Lagrangian).

WhenEvent is triggered but does apparently not apply correctly the reflection. The following works (note that it uses only one WhenEvent). The Print["bounce"] is of course to be removed, I kept it just to check that the bouncing condition is triggered.

Remark: the motion is different than that computed with Maple (especially after $t=4$). I guess that is because the system is chaotic so the small numerical differences between both lead to large discrepancies after a few bounces. 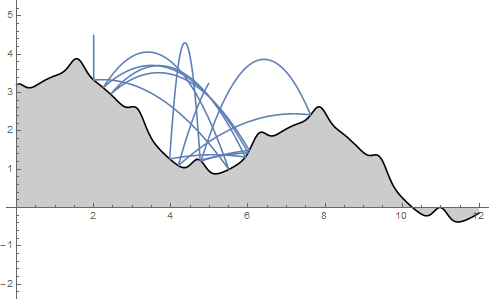 WhenEvent does not work as well as I'd like here, I had to use an inequality and then need to force a small MaxStepSize or it occasionally misses.

Not the answer you're looking for? Browse other questions tagged differential-equations animation event-detection maple or ask your own question.

19
How to simulate the true reflective movement of a particle bouncing around in an ellipse?