I have a somewhat messy piece-wise function that I need to convolve with a Gaussian function. Solving the problem analytically is taking forever so I would like to solve the problem numerically. However, I am having a few issues and any help would be greatly appreciated.

Here is an example of simplified version of what I am trying to implement using ListConvolve.

Following is a convolution between a simple trig function and Gaussian function done analytically.

The result is what I expected. Now I would like to do the same problem numerically (i.e. find convolution). I tried using ListConvolve, a built in function

I run into two problems. First the time axis is shifted for the convolved data. In the specific example if I pick the argument for ListConvolve[#,#,97] to be 97 instead of 1, the convolved plot seems to be more or less aligned with my original data. Also to get the normalization of the convfunc properly I divide the resdata by 1/stepsize. How would I pick those two parameters intelligently such that the numerical convolution would agree with the analytical one. 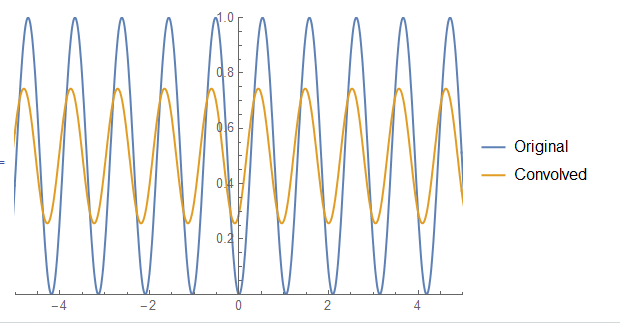 Browse other questions tagged numerical-integration numerics convolution or ask your own question.

13
Convolution with interpolated function
2
Improving the speed/efficiency of multiple (finite range) convolutions for a causal response plot
5
How to perform convolutions on this complicated pdf?
1
normalization of convolution product when using Fourier transform
1
Help For Solving Complicated Function
1
Getting Convolve to behave in preparation for NonlinearModelFit
1
Discretization and Dirac Delta function
1
Numerically convolve lists in mathematica
1
Using Convolve with functions that contain error functions, and iterative convolutions