Following the recommendation of a presentation or article which I now only vaguely remember I have been experimenting with a particular code format:

I have found this format to be reasonably general and have above average readability. I note that my use of it (which is by no means unique) seems to be well accepted so I think others must find it readable too.

A couple of things keep me from adopting this format as my go-to style: the first is the requirement for additional Function constructs over more heavily bracketed code. The second is the way that this code is automatically formatted in Notebook Input Cells which is what my question is about.

(Pardon the long introduction but I feel that context is necessary.)

When multiple // postfix operations are written one on each line the standard code indenter does this: 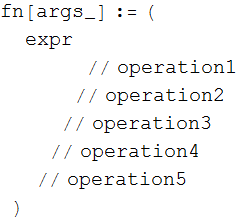 I find this indenting weird and inconvenient. I suppose it exists to indicate that operation1 is "inside" operation5, etc., but that's not really how I think about these operations; rather I think of them as a series of sequential steps performed in order from one to five.

It also ends up crowding code into the right margin when there would otherwise be plenty of room.

All that out of the way my actual question is this: do other people regularly benefit from the indenting shown above, and what coding style(s) is it useful for?

If this indenting is not of use in other styles or from different perspectives I would perhaps campaign to have the indenting changed in future versions to the vertically aligned form shown in the first code block in this question.

As requested, I'll expand on my comment a little. The indentation makes sense if you look at the following comparison of four constructs, where the first one is from the original question: 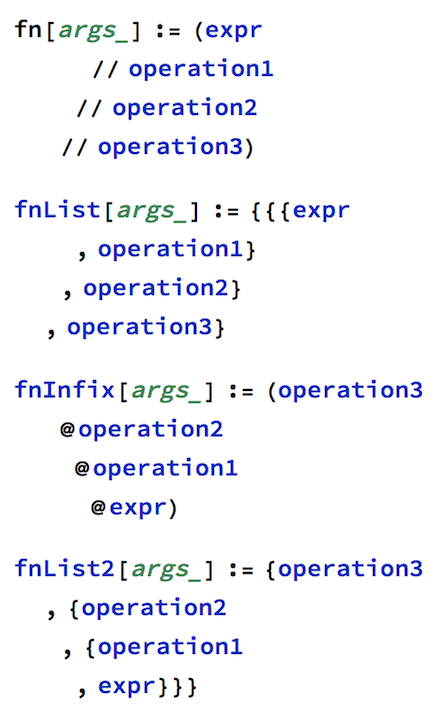 You see the same indentation in the first two examples, and the opposite indentation in the remaining two. The examples built with just Lists illustrate that the indentation is determined by the nesting level. The more deeply nested, the larger the automatic number of LineIndents is. Recall that the actual interpretation of the input for fn is operation3[operation2[operation1[expr]]].

This is why the indentation decreases downward in the first two examples but increases in the last two: as the List constructs make explicit, the operations nearest to expr are deepest. The @ operator is the "counterpart" of // in that it allows you to reverse the order of operators and arguments. This reversal is what causes the reversed indentation.

In conclusion, the choice of indentation is consistent with the general prescription followed by the notebook interface, to indent according to nesting level. Changing this for // alone would then give you inconsistent indentation if you also use @ (or in fact any other nested expressions).

Not the answer you're looking for? Browse other questions tagged notebooks formatting language-design coding-style or ask your own question.

48
Granular versus terse coding
10
Partition a list by count of a number
24
Why doesn't a Composition[] hold its arguments and what can be done about it?
18
Combining # & pure functions with post-fix notation
13
How to implement lane-change rules for Nagel Schreckenberg model
14
Is there a way to change the indentation behavior of the postfix operator //?
3
Split list based on positions contained in another list
3
Aligning input form of a sequence of Queries

3
How to edit the text coming together with the numeration of pages in pdf produced out of a notebook?
6
Maintaining stylesheet information in Cell[]
1
Is there a way to "hold" prefix / infix / postfix notation?
7
How to modify font for all text fields?
0
Why MMA cannot apply the correct style of unit?
3
equivalent of stylable HTML elements?