How to superimpose plots and graphics in the same coordinate system?

NB: I am aware that "plots" are graphics too, so the title would be more precisely worded if "graphics" were replaced by "non-plot graphics".

EDIT: I have edited my original example to make the problems with the solutions proposed so far more evident.

For example, let plot be this plot:

...and graphic be this disk:

I want to superimpose plot and graphic so that

More generally, I want to superimpose an arbitrary sequence of plots and graphics so that the two requirements above are satisfied.

Although this follows directly from (1), let me explicitly state that the ordering of the items in the sequence of plots and graphics should have no effect in the relative placement of the superimposed items.

The Overlay command meets requirement 2 only:

IMPORTANT: Even though the placement and proportions it produces are completely off, Overlay gets right the aspect of faithfully preserving the axes, frames, ticks, etc. of its components.

The Show command meets requirement 1 only:

The frame in Show's output is spurious: it does not correspond to graphic's original frame. Furthermore, plot's axes are gone.

A more subtle (and serious) problem with Show is that it is not commutative:

In this example, flipping the order of items in the call to Show causes one of the items is no longer shown.

The result from Show looks much closer to the desired result, but is missing plot's axes, ticks, etc.

IOW, plot's contribution to the final result should look like this:

Note, in particular, the extents of the axes.

NB: In this example, the x and y coordinates are scaled equally on the screen (and, therefore, in the desired final result, graphic's disk looks circular and plot's orange line has a 45-degree angle on the screen). In general, however, the scaling of the x and y coordinates need not be equal. The only requirement is that the scaling, whatever it is, applies equally to both plot and graphic.

The problem you will run into by keeping the frame/axis ticks & labels is that the space outside of the bounds of the frame/axis is not measured in the coordinate space of the graphic. It is instead measured in printer (or desktop publishing) points.

However, if you were willing to forgo some tick labels with the option to support their absence by a frame then you can achieve the superimposition.

superimposeGraphics removes the PlotRangePadding (in coordinate space units) and ImagePadding (in printer points) from the graphics. The graphic is now bounded by its frame and only contains its plot range.ImageMargins could also be set to zero if you like. The AspectRatio to Automatic so that no stretching will occur from the inset sizing. Now these can be Inset into the graphic and sized to the coordinate space of the enclosing Graphics. The PlotRange is set to include all graphics. 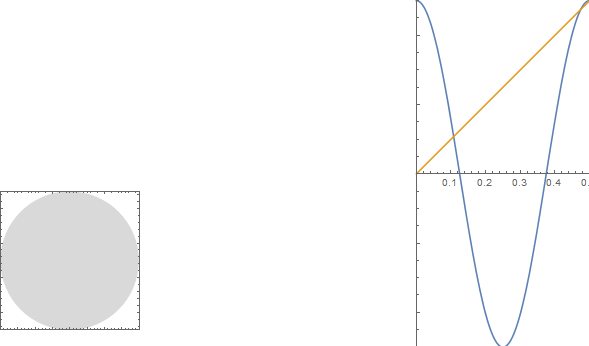 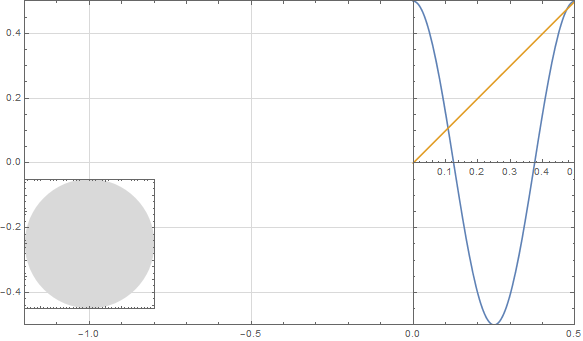 Use Prolog or Epilog 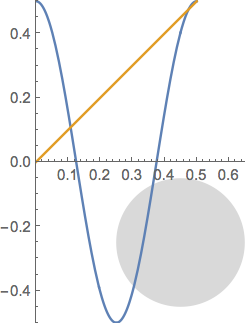 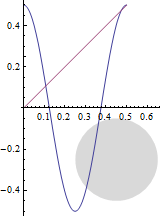 If it is OK if some items obscure others, then as noted by @AlbertRetey in a comment, you just need 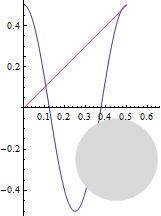 18
How to align coordinate systems of Inset and enclosing Graphics?
48
Is FullGraphics an abandoned function? Is there an alternative?

3
The same range on each plot in a grid
8
How to set the ratio between the vertical and horizontal scales of plots?
8
How to make Inset graphics maintain relative sizes when combined
4
Frame within a Frame for all plots? Why?
10
How to create a multi-graphics plot (i.e. the decomposition of phase plane portrait) with well-organized structure?
4
How to preserve scaled circular shapes when combining graphics?
3
How can I put common frame ticks on the leftmost of a row of graphics?
2
Overlay Two Plots, One With Extended Domain and the Other With Frame