So I have a code which, after a very long computing time, spits out a single, very non-trivial plot in one variable. Repeating the computation with different parameter values, I output a different plot. I would really like to combine a handful of these into a single plot on one set of axes. In other words, I'd like to run my crazy script, add the curve to the plot, run the code again and add the resulting curve to the plot.

As a much over-simplified example, imagine I had

and I wanted to plot A, B, and BB on the same plot over the same range. Now obviously, in this example this is painfully easy to do, but imagine that each of those plots resulted from running a long, highly non-trivial script, and to generate the next plot, I had to run the same script again with different parameters.

Is there an easy way to sort of iteratively save these plots and get them into one plot with one set of axes?

There are plenty of solutions, for example : 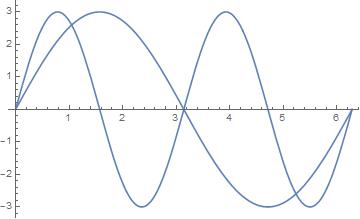 You only loose your work in the case of a kernel crash.

2
Copying each object in a plot separately as an image
4
Drawing outside of 3D plot area
0
Density plot through a single-lined double loop
2
Different shades of the same colour in one plot
0
How can I add transparency to a combined plot?