Is it possible in Mathematica to plot an even piecewise function like:

but I can't seem to get it to repeat or show evenly.

plotting functions piecewise
Share
Improve this question
edited May 6 '16 at 12:52

The function $f$ in the question has been declared over a fundamental domain, in this case the interval from $0$ to $\pi$. To extend it to a function of the reals, for each $t$ not in this domain we need to find a group element $g$ (generated by the reflection and translation) for which the application of $g$ to $t$ yields a number $t^{(g)}$ in the fundamental domain. We then define $f(t)$ to equal $f(t^{(g)})$.

Although this may sound abstract, it translates to a highly general, efficient, almost mindless computational method. For one-dimensional groups, we can figure out $t^{(g)}$ by means of the Mod function (to implement the translation) and the Abs function (to implement the reflection). It is convenient first to translate $t$ into a domain that is as close to the origin as possible: do this by offsetting Mod by half the period, as in Mod[t, 2 Pi, -Pi]. The result now lies in the symmetrical interval $[-\pi, \pi]$ around $0$. Taking the absolute value assures the result is positive, where $f$ can be applied. Whence, after defining f as in the question, merely declare its extension g by following this recipe: 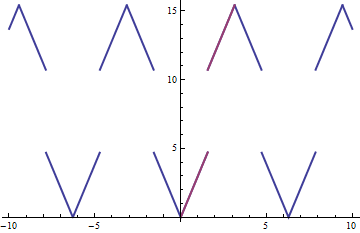 Visually, it is clear that $g$ (the blue graph) is even and periodic and agrees with $f$ (the red graph) on the fundamental domain $[0, \pi)$ where $f$ is defined.

You could use a Mod function to sample the area you have the function defined over at other parts of the $x$-axis if that's what you're aiming for. 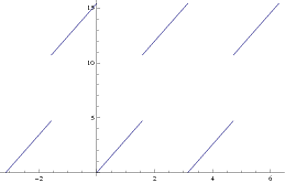 Not the answer you're looking for? Browse other questions tagged plotting functions piecewise or ask your own question.

6
Graph a Function with general conditions