how to ask for user defined function using manipulate

Probably this has been asked before, but I could not find an answer. I am trying to create an interactive applet using "Manipulate" that works with a user defined function. I would like to have an input field in the control part of "manipulate" and work with the expression the user enters in the input field. For example,

plots the graph of the expression entered in the input field, but I don't know how to modify this to graph the derivative. Any help would be appreciated.

It would be nice to have a "bullet-proof" Manipulate[] that does not depend on, or is not affected by, global values, such as one for t. There are a few problems, challenges and requirements:

Well, with a bit of luck, I've got it down to the following: 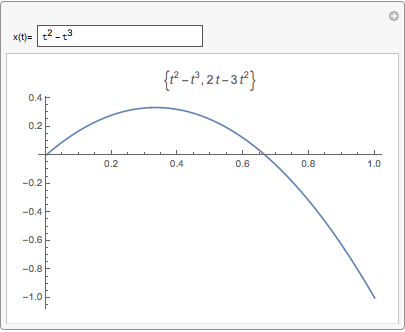 When you plot an expression, Plot substitutes in the value of the variable (in your case t) so you cannot do the derivative in the Plot (as t will no longer be a symbol, but the number substituted in). To get around this you can do the derivative outside the plot, like this:

Note With is used here to scope the variable der.

You can use InputField as string, then use ToExpression to convert to Mathematica expression, then use D to take the derivative.

Not the answer you're looking for? Browse other questions tagged manipulate function-construction inputfield or ask your own question.

7
Prevent interdependence of controls
6
How do I dynamically change Manipulate controls?
5
how to use InputField function within the manipulate function
10
Using Interval Slider in Manipulate for Plot Functionality
3
visualizing complex polynomials
3
Updating a Dynamic variable based on another variable's change
0
How to plot functions from user input?