Why should I avoid the For loop in Mathematica?

Some people advise against the use of For loops in Mathematica. Why? Should I heed this advice? What is wrong with For? What should I use instead?

core-language coding-style faq
Share
Improve this question
edited May 5, 2020 at 13:06

If you are new to Mathematica, and were directed to this post, first see if you can use Table to solve your problem.

I have often told people, especially beginners, to avoid using For in favour of Do. The following is my personal opinion on why using For is harmful when learning Mathematica. If you are a seasoned Mathematica user, you won't find much to learn here. My biggest argument against For is that it hinders learning by encouraging error-prone, hard to read, and slow code.

For mimics the syntax of the for loop of C-like languages. Many beginners coming from such languages will look for a "for loop" when they start using Mathematica. Unfortunately, For gives them lots of ways to shoot themselves in the foot, while providing virtually no benefits over alternatives such as Do. Settling on For also tends to delay beginners in discovering more Mathematica-like programming paradigms, such as list-based and functional programming (Table, Map, etc.)

Use Do instead of For

The typical use case of For is iterating over an integer range. Do will do the same thing better.

A common beginner-written program that we see here on StackExchange collects values in a loop like this:

This is of course not only complicated, but also slow ($O(n^2)$ complexity instead of $O(n)$). The better way is to use Table:

Table and Do have analogous syntaxes and their documentation pages reference each other. Starting out with Do makes the transition to Table natural. Moving from Table to Map and other typical functional or vectorized (Range[n]^2) constructs is then only a small step. Settling on For as "the standard looping construct" leaves beginners stuck with bad habits.

Another very common question on StackExchange is how to parallelize a For loop. There is no parallel for in Mathematica, but there is a ParallelDo and more importantly a ParallelTable. The answer is almost always: design the computation so that separate steps of the iteration do not access the same variable. In other words: just use Table.

More general versions of For

For is of course in some ways more flexible than Do. It can express a broader range of iteration schemes. If you need something like this, I suggest just using While instead.

When we see for, we usually expect either a simple iteration through an integer range or through an array. Doing something else, such as modifying the value of the iterator in the loop body is unexpected, therefore confusing. Using While signals that anything can happen in the loop body, so the readers of the code will watch out for such things.

When is For appropriate?

There are some cases when For is useful. The main example is translating code from other languages. It is convenient to be able to translate analogous for loops, and not have to think about what may be broken by immediately translating to a Do or a Table (e.g. does the loop modify the iterator in the body?). Once the translated code works fine, it can be rewritten gradually.

There are existing questions on this, which also discuss other cases:

The problem with For is that it hinders learning and makes it very easy for beginners to introduce mistakes into their code.

If you are new to Mathematica, my advice is to forget that For exists, at least for a while. You can always accomplish the very same things with Do and While—use them instead. Very often you will be able to replace Do with a Table or even a vectorized expressions. This will help you learn to write effective Mathematica code faster.

If you are unsure about a use of For, then ask yourself: do I see a reason why For is clearly better here than Do or While? If not, don't use it. If yes, you may have found one of the rare good use cases.

(By the way, look how concise are the codes of Do, Table and Range compared to For and While.)

And a plot (vertical axis in log-scale): 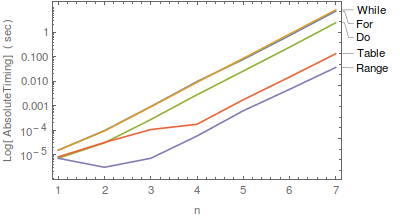 Do is about $3\times$ faster than For/While; for this particular application, one could (and should) employ Table/Range, which are two orders of magnitude faster than For.

The functional paradigm, exemplified by this code:

will usually result in the fastest execution because it takes advantage of the architecture of the machine. Both the CPU and the memory are optimized for sequential access, so when you pass a function over a list of data to transform that data, the code stays in one place, taking advantage of locality (no code-cache misses), and the data is accessed as one continuous stream of bytes. The above line of code takes 0.281 seconds to complete on my computer, while the line below ran for well over an hour and only produced a list 1,190,218 elements long:

A problem that arose in a recent Q&A, which is solved by Outer (not yet mentioned here), was

For the sake of illustration, take two lists:

We want to apply a function f to each ordered pair of elements from a and b. A for-loop way would be as follows:

The following does the same:

For a product three lists, use

The same can be done with Table:

Like Outer, Table can be extended to higher dimensional products.

Not the answer you're looking for? Browse other questions tagged core-language coding-style faq or ask your own question.

0
Assigning value to an array in nested for loop
0
An elementary question about For loop
0
Avoiding For loops to perform an assignment to a variable with indices of user-choice
524
What are the most common pitfalls awaiting new users?
197
Alternatives to procedural loops and iterating over lists in Mathematica
41
Can this be written well, without loops?
59
Are there any cases when For[] loops are reasonable?
7
Finding C[i]'s expression in DSolve solution
10
Optimizing Mathematica Code
14
Why does NDSolve fail to solve the PDEs and spit out mconly warning?
See more linked questions

197
Alternatives to procedural loops and iterating over lists in Mathematica
136
Can one identify the design patterns of Mathematica?
44
Is Mathematica comparable to C++ for creating standalone applications?
9
Why are functions called first-class objects in Mathematica?
3
Converting a nested for loop from MATLAB
6
Simple while loop alternative in Mathematica
2
Good coding for a sequence of derivatives