How to find all function which cannot be ToExpression?

You will get a chunk error information.I try to find which function make this behavior,so I make a custom cache to collect all function be executed:

The last of tem is

This function abort the caculation:

But I don't know which function result to this

In this post,I try to find all function which can not get a Normally result(Such as ToExpression["Plot"] get Plot or ToExpression["Sin"] get Sin,then this define a normal case,and the ToExpression["$Version"] wil not give $Version but give its value,I will think that as unnormal here).How to implement it?

Reflection in Mathematica is a tricky business. This makes the definition of a "normal result" tricky as well. This response will point out some of those difficulties and provide some tools to deal with them.

The core issue is that naive use of ToExpression to convert a string into a symbol will cause the symbol to be evaluated. For example:

Thus, when we evaluate ToExpression /@ Names["*`*"] we are evaluating a very large number of symbols. This is a dangerous operation. Many symbols are never meant to be evaluated in isolation.

The question gives us a few examples. Let us look at the first. In a fresh kernel session (mine is V11.0.1), evaluate:

The problem is that AbsorbNumbers has a pattern as its value. By itself, that pattern contains an evaluation leak which generates a (harmless) message.

This example might be harmless, but many symbols are not so harmless. Evaluating an arbitrary symbol might:

These actions are not entirely safe.

Should We Detect Such Failures?

It might be possible to assemble a list of symbols that cause trouble. For example, we could use Check to identify symbol evaluations which issue messages and CheckAll to find evaluations that Throw or Abort. But such tests are too late -- whatever harm the evaluation caused is already done.

Therefore, I suggest that it is too harmful to attempt to evaluate all symbols in the system. We need another approach.

It is safer to inspect symbols without evaluating them. We can easily prevent the evaluation like this:

This, however, does not tell us anything about Red itself. We can use functions OwnValues, DownValues and UpValues to get some information about symbols:

We can combine these functions with ToExpression to get information about a symbol in string form in a relatively safe manner:

However, for the case at hand there is a problem with these information functions. They are HoldAll but not HoldAllComplete. So if we are going to scan across all symbols, there is still a chance for potentially dangerous evaluation leaks.

I prefer to use a set of undocumented (V11.0.1) information functions:

These functions have a couple of advantages that are relevant to the current discussion. First, they are HoldAllComplete so they will prevent as many evaluation leaks as is possible from high-level code. Second, they are aware of built-in kernel definitions that are invisible to DownValues et al.

Here is a useful helper function:

This tells us that Sin has built-in down-value definitions even though DownValues[Sin] returns nothing.

Armed with this helper, we can ask various questions:

What are all the symbols with no evaluation rules at all?

What are all the symbols that have built-in function definitions?

What are all the symbols that have function definitions but are not built-in?

OK, so evaluating lots of symbols is dangerous and we should not do it. Fine. But the question remains: how can we identify which symbols are causing problems?

Unfortunately, the problematic evaluations take different forms, so no one technique will find them all. But here are a few tricks that will often bear fruit.

We can use the debugger to find the source of the first message. Turn on the debugger and check the Break at Messages setting. Then evaluate:

The debugger will stop at the first message. The stack window shows: 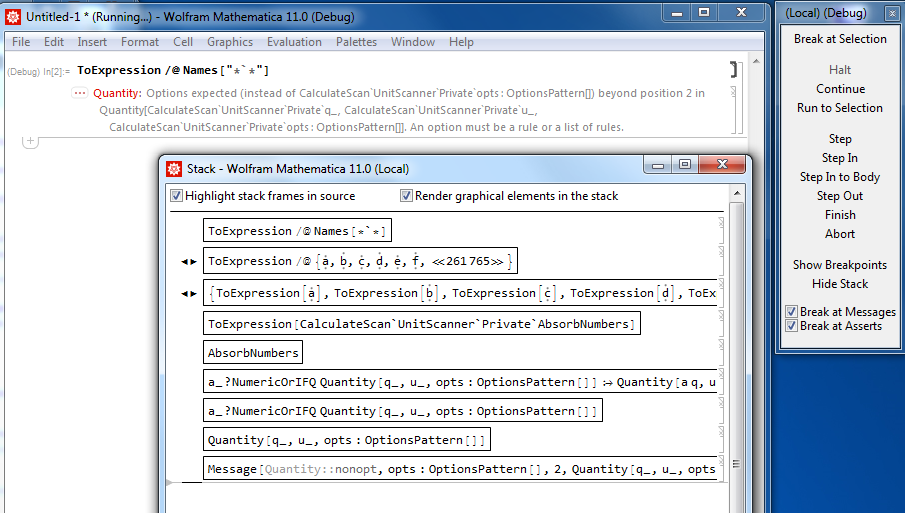 We can see ToExpression[CalculateScan`UnitScanner`Private`AbsorbNumbers] on the stack.

Next, let's consider the "Buzz" that appears as output when scanning the symbols. This is not accompanied by a message, so the "break at messages" trick is not going to work. The "Buzz" is very strange because it actually generates output and causes a beep to sound from the speaker. Since it generates output, we might guess that it is using Print. So let us use Trace to set up a trap for calls to Print and force the debugger to stop there: 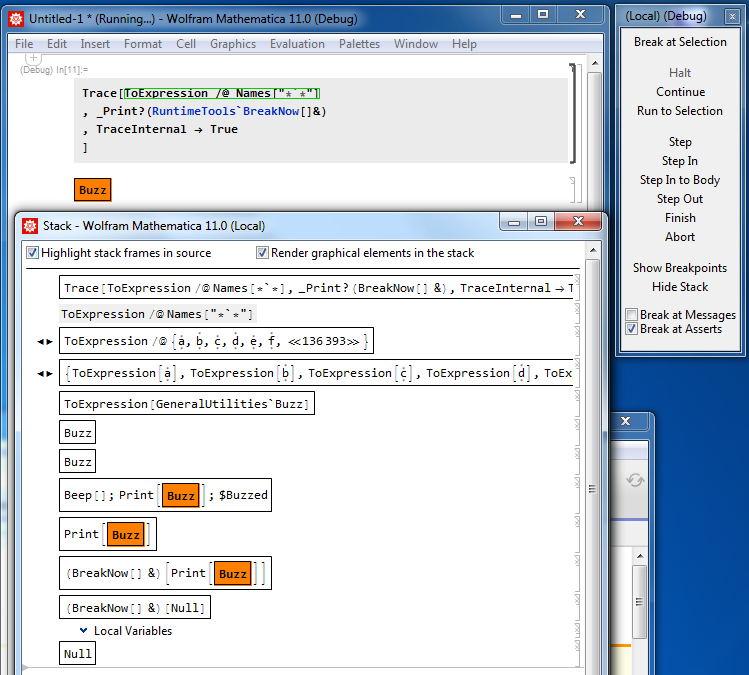 We see that GeneralUtilities`Buzz is the culprit. What a strange symbol. It should probably be a function... but we may have just stumbled upon a nice tool for finding evaluation leaks.

If the culprit had not been using Print, we might have tried other guesses like CellPrint, or even Play or Beep to try to catch the sound.

We got lucky in the last case because we correctly guessed that the buzzing was caused by a call to Print. But what if we had no idea at all about the cause? Well, we can always resort to brute force.

Manual experimentation quickly reveals that "Buzz" appears when we scan symbols beginning with "B":

We could continue in this fashion using a divide-and-conquer approach to narrow down the range of symbols that could be responsible. In this case, we will assume that there are not that many symbols that start with "B", so let's just print them all out and then look for the "Buzz":

There it is, right where we found it before in GeneralUtilities`Buzz.

One possible approach is to use ValueQ to see if a Symbol is considered to have a value. (Caveat: this still causes evaluation as is the subject of Implementing a safe ValueQ that does not evaluate its argument.)

Because many Symbols are defined to load additional libraries the first time they are used you will get a lot of false positives the first time this is run, so run it a second time for more useful results. I use Quiet to suppress the messages that would otherwise be generated.

If you describe the motivation behind this question I might be able to refine this result.

Not the answer you're looking for? Browse other questions tagged warning-messages built-in-symbols or ask your own question.

24
Implementing a safe ValueQ that does not evaluate its argument
11
How to get the parameter number of inbuilt function
6
How to judge the function is kernel function or not in program method?

2
Fighting Less::nord at the root: Any unintended consequences?
9
Need help with exception handling
11
Incompatibility of Row and TeXForm
10
Can a System symbol spontaneously leak into a Global namespace?
2
Implement edge contraction function which respects vertex weights
3
How to find the list of all the elementary functions in mathematica?
0
Why DSolve cannot Find a General Solution for this ODE?
0
When I define a Piecewise function containing a solution to a partial differential equation, the function cannot be evaluated numerically
1
Error with NIntegrate of a two variables integration