I'm working with a 5x5 matrix n which has three eigenvalues equal to zero. I want to perform the SVD of this matrix in Mathematica. The matrix n is given by

The matrix ends up having very small singular values ($10^{-16}$ or so) which I believe are numerical errors. Now consequently, the matrices which come out of SingularValueDecomposition[n[x]] end up being very noisy functions of x.

I have tried changing the precision of the input using SetPrecision and the Tolerance of the SVD but nothing appears to remove to noise.

Is there anything else I can do?

Edit: What I do with this after is 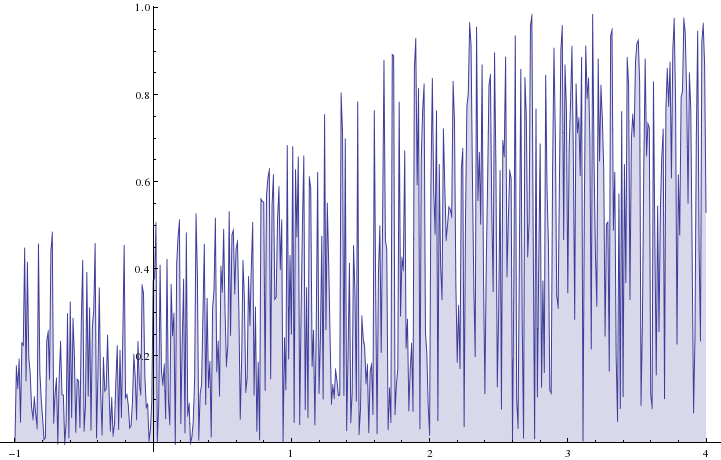 Is there anything else I can do?

With a matrix of this size it seems better to do the computations symbolically.

Compute SVD symbolically (it is not that slow):

The problem, as I see it, is that three of the singular values (and eigenvalues) of n[x] are zero, or equivalently, that the 5x5 matrix has rank 2. That means that u[x] and v[x] will carry the first two standard basis vectors to a basis for the column space and orthogonal complement of the null space, respectively. The column vectors of u[x] and v[x] are called the left and right singular vectors, respectively.

When the singular values are distinct and ordered in the traditional decreasing order, the singular vectors are unique up to scalar multiple of absolute value 1. It may be possible to construct the functions u[x] and v[x] to be at least piecewise continuous (by imposing some arbitrary condition, such as some entry in one of the matrices that is generically nonzero be real and nonnegative).

When singular values (or zero eigenvalues) are repeated, then the singular vectors corresponding to a given repeated value need to span a subspace of dimension higher than 1. This makes it harder to consistently choose a basis that varies continuously with the parameter x. When a zero eigenvalue is repeated, as in the OP's case, then the OP is probably right that numerical noise exacerbates the problem. See the last to figures below.

In the OP's example, there are two (nonzero) singular values. These are distinct except for x == 1. The first two columns of u[x] and v[x] vary continuously, except at x == 1. Note however, that the subspaces should be varying continuously with x, I think, although I did not investigate that hypothesis. It seems obvious from the results that SingularValueDecomposition does not yield a continuous parametrization in the OP's form, although @Anton Antonov's symbolic approach seemed to work for me (but not the OP, per OP's comment). Perhaps that will be resolved.

Images, worked out with the original box1[x]. The vector components plotted are flatten out, so that the two singular vectors yield ten components and thus ten plotted curves. 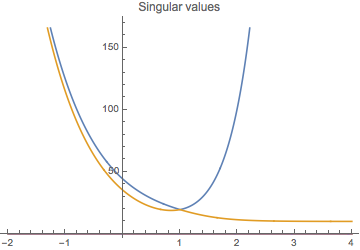 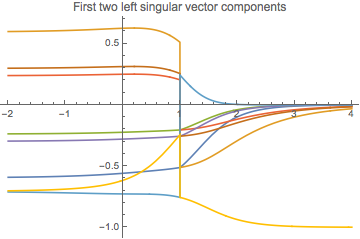 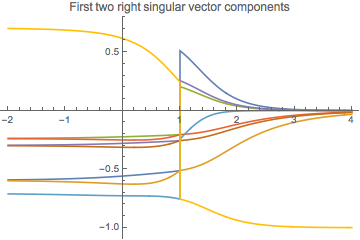 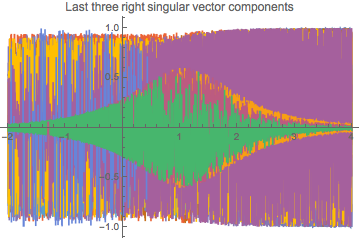 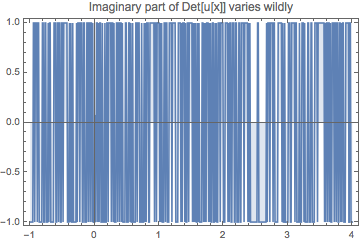 Not the answer you're looking for? Browse other questions tagged numerics linear-algebra or ask your own question.