In version 11.0.1 it appears that ColorFunction is being ignored for BarChart with grouped data. 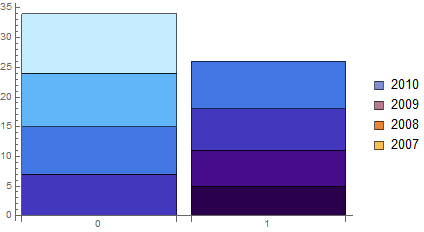 All of the 2010 entries are not the same colour and the colours in the legend are not using the colours of ColorFunction. Similarly for the other groups.

This seems like a bug. Any ideas for workarounds? Win 7 Pro

Confirmed bug: Have to figure out the case number as I am getting a couple of confirms at the moment but all on the same case number. It is one of these but three where responded with separate emails all from one case number so I can't tell which one it is. [CASE:3780234] [CASE:3780235] [CASE:3780239]

If you don't mind a crude hack: 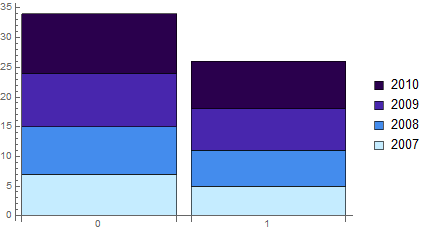 This example is a bit tricky, since you don't actually want to use a ColorFunction, since then the bars are colored by their height and you don't have a consistent coloring by keys.

So the bar chart in the OP looks correct based on the input, but the legend is obviously nonsense - that should be reported as a bug. Perhaps if a ColorFunction is used, the ChartLegend should default to a color bar like DensityPlot gives.

Simon gives a good workaround that uses the ChartStyle -> <named_color_scheme> option method, but as he says it is a bit of a hack (not that I don't love a good hack). This is a convenience method that makes it so you don't have to give explicit styles for each element. But the in this case the OP wants to customize it a bit, having the colors go in reverse order, so we can just use the more basic functionality of ChartStyle and give it a list of Style specifications. 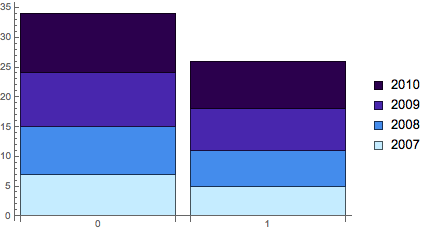 You can also use a color function of your choice as the setting for Method suboption "ChartDefaultStyle": 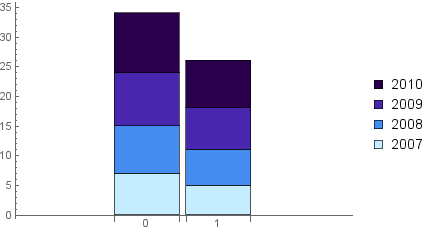 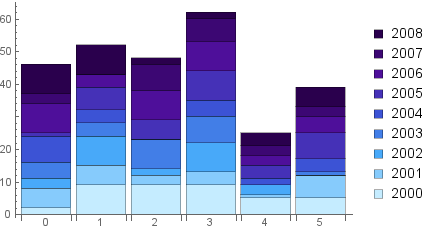 I give another solution:

I use other data for simplicity, answer is already accepted and I post because I think it can be a simpler approach using Legended[]

Not the answer you're looking for? Browse other questions tagged plotting bugs color legending charts or ask your own question.