Are there other fonts that can be used for mathematical symbols?

I have noticed, that choosing another font (via Stylesheet) does not change the math font (e.g. for greek symbols). Symbols will just stay the same most of the time. I suspect that MMA is just substituting missing symbols in the new font with the ones from "Times" (or an internal one, surely it is "Mathematica1").

Choosing "Courier" will result in different greek symbols, this is the only one I found.

Which fonts include the neccessary symbols?

Following from Mr. Wizard's post, I was able to get Mathematica to substitute Greek letters with whatever font I want by editing \SystemFiles\FrontEnd\TextResources\UnicodeFontMapping.tr. I first tried changing

which worked for changing the font, however it forced all of the symbols in Mathematica1 to be rendered with DejaVu - including things DejaVu obviously doesn't have like the line for a fraction and the \[Wolf] symbol.

So I undid that, and then just changed the Greek letters to reference font set 0 instead of 2, -2, or 4, which works so long as you use a font that supports a wide range of Greek letters.

I did this through the Sampi symbol, and now the Greek looks much better with any font. Here's my file if you want to copy it.

Here's what it will look like if you do these changes: 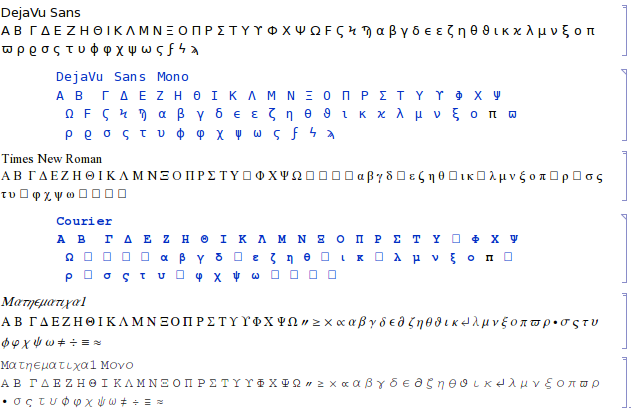 The next two are what happens if you change your Unicode Mapping but don't change the default font - for Text it's Times and Input it's Courier Bolded. Notice that they're both missing some of the fancier symbols.

Internally there are only two sets of Greek symbols: proportional and monospaced. These reside in the Mathematica1 and Mathematica1Mono font files.

These characters are mapped to these specific fonts in the configuration file \SystemFiles\FrontEnd\TextResources\UnicodeFontMapping.tr. Presumably any font with the appropriate glyphs could be used with the correct mapping but the result may not be pleasing as the spacing and alignment are likely to differ considerably. Should you choose to edit the file it has some descriptive comments in the header, but there are a few things that may not be obvious. The file starts like this:

Fonts are given identifiers based on the line on which they appear. Mathematica1 is on the third line after the @@resource header, and counting from zero it is therefore given the identifier 2. The file goes through 15 by default but I believe you an add additional fonts in this manner.

The letter alpha is mapped by this line:

I believe the fields are:

Not the answer you're looking for? Browse other questions tagged front-end fonts or ask your own question.

2
Greek letters don't depending of the font
19
Notebook formatting - easier descriptions for equations and results?
8
How can I set default size for some characters
3
Misaligned DensityHistogram, DistributionAxes & PlotRange
1
How can I get proper Latin Modern Math (including Greek letters) within Mathematica?