How to model Macroeconomic dynamics?

I am rather new to Mathematica and I wanted to see if I could get some help with the following. I am trying to generate a model of macroeconomic indicators defined by the following functions, but I do not know how to input these in Mathematica or be able to manipulate them a bit more.

Since you don't sem to have any explicit forward-looking / rational expectations elements in your system (the equation for Pie depends only on lags), I don't know why you are expressing your time subscripts as $T+2$ rather than $t$, $t-1$, $t-2$.

Your system is essentially linear, so I would suggest that you define your system as a vector state variable with a matrix of coefficients, which you can then update to simulate a time series using NestList. If you also had stochastic elements, which the above equations don't seem to do, then you would use FoldList. Because you have two lags of variables on the right-hand side of the equations, the first lag is also a state variable, which you need to track as part of the state vector.

Once you do that, you will realise that you have not specified equations for some of your variables, including $R$ (I'm guessing interest rates) and $YNlev$ (I'm guessing nominal GDP). You need to do this to have a complete system. In the latter case, it is presumably just the identity that $YNlev = Ylev * Pi$.

Now, to comment on your usage of Mathematica. You can definitely do this in Mathematica, but before you start, as with any new programming language, you really need to familiarise yourself with some very basic aspects of the syntax. The most relevant ones given your proposed input are:

The other functions that might be useful to you are RSolve and RecurrenceTable. Rather than solve out your system for you, here is a simple example of the kind of output you might expect. 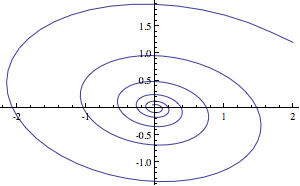 Maybe this will help. It's a collection of macro growth theory solved in Mathematica

Not the answer you're looking for? Browse other questions tagged modeling or ask your own question.

567
Where can I find examples of good Mathematica programming practice?

16
How to do System Dynamics simulations / diagrams in Mathematica?
4
How do I represent a system dynamics feedback loop?
5
Problem with SARIMA Time Series Model
4
FindFit and NMinimize to fit a parametric model (minimize the distance of two curves)
1
How to make this model in wolfram mathematica?
2
How to model a two-phase motion with Manipulate
2
PIDTune and characteristic equation of zero