Given a set of data, is it possible to create a linear regression which has a slope error that takes into account the uncertainty of the data?

Here's a method for doing weighted orthogonal regression of a straight line, based on the formulae in Krystek/Anton and York:

ortlinfit[] expects data to contain the $(x_j,y_j)$ pairs, and errs to contain the corresponding uncertainties $(\rm{dx}_j,\rm{dy}_j)$. The routine returns the best-fit line as a pure function, as well as the uncertainties in the slope and intercept ($\sigma_m$ and $\sigma_k$).

As an example, here's some data used in York's paper:

Now, let's look at the data, the associated error ellipses (constructed from the uncertainties), the best-fit line, and the "bounding lines" $(m-\sigma_m)x+(k-\sigma_k)$ and $(m+\sigma_m)x+(k+\sigma_k)$: 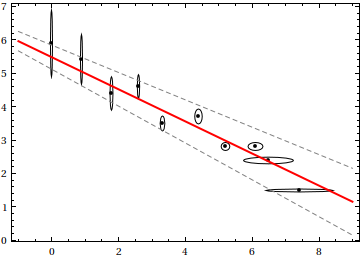 Use the Weights option to LinearModelFit, setting the weights to be inversely proportional to the variances of the error terms.

This is a standard problem: when the errors in the individual $y$ values are expressed in a way that can be related to their variances, then use weighted least squares with the reciprocal variances as the weights. (Search our sister site Cross Validated for more about this, including references and generalizations.)

where $\beta_0$ (the intercept) and $\beta_1$ (the slope) are constants to be estimated, the $\varepsilon_i$ are independent random deviations with mean zero, and $\text{Var}(\varepsilon_i) = \sigma_i^2$ for some given quantities $\sigma_i$ assumed to be known accurately. (The case where all the $\sigma_i$ equal a common unknown constant is the usual linear regression setting.)

In Mathematica we can simulate such data with random number generation. Let's wrap this into a function whose arguments are the amount of data and the slope and intercept. I will make the sizes of the errors vary randomly, but generally they will increase as $x$ increases.

Here is a tiny example of its use. 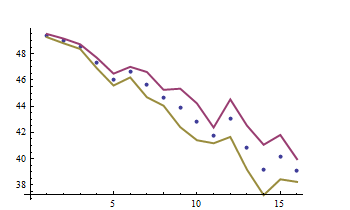 The simulated points are surrounded by error bands.

To fit these data, use the Weights option of LinearModelFit. Once again, let's prepare for later analysis by encapsulating the fitting in a function. For comparison, let's fit the data both with and without the weights.

The output is a list whose elements give {intercept, slope}: the first element is for the weighted fit, the second for the unweighted.

Monte-Carlo comparison of the weighted and ordinary least squares methods

Let's run a lot of independent trials (say, $1000$ of them for simulated datasets of $n=32$ points each) and compare their results: 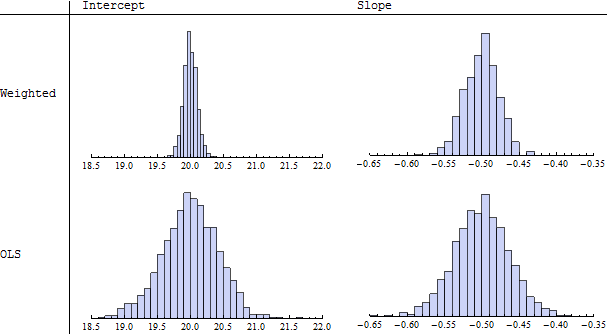 Because I specified an intercept of $20$ and slope of $-1/2$, we will want to use these values as references. Indeed, the histograms in the left column ("Intercept") display sets of estimated intercepts hovering around $20$ and the histograms in the right column ("Slope") display sets of slopes hovering around $-0.50 = -1/2$. This illustrates the theoretical fact that the estimates in either case are unbiased. However, looking more closely at the spreads of the histograms (read the numbers on the horizontal axes), we see that those in the upper row ("Weighted") have smaller widths of their counterparts in the lower row ("OLS," or "Ordinary Least Squares"). This is evidence that the weighted estimates tend, on the whole, to be better then the unweighted ones, because they tend to deviate less from the true parameter values.

When the underlying data truly conform to the hypothesized model--there is a linear relationship between the $x$'s and $y$'s, with errors in the $y$'s having known but differing standard deviations--then among all unbiased linear estimates of the slope and intercept, weighted least squares using reciprocal variances for the weights is best in the sense just illustrated.

Obtaining the estimation error of the slope

Now, to answer the question: we would like to assess the estimation error in the slope. This can be obtained from the fit object in many ways: consult the help page for details. Here is a nicely formatted table:

In this case, for this particular set of simulated data (as created previously), the weighted method reports a much smaller standard error for the intercept than the OLS method (because errors near $x=0$ are low according to the information in errors) but the weighted estimate of the slope has only a slightly smaller standard error than the OLS estimate of the slope.

Errors in both $x$ and $y$ can be handled, using--for instance--methods of maximum likelihood. However, this involves considerably more mathematical, statistical, and computational machinery and requires a careful assessment of the nature of those errors (such as whether the $x$ errors and $y$ errors are independent). One general result in the statistical literature is that when the $x$ errors are typically smaller than the $y$ errors, yet independent of them, it is usually safe to ignore the $x$ errors. For more about all this, good search terms include "errors-in-variables regression," "Deming regression," and even "principal components analysis (PCA)".

I made this implementation of York's classical (and easy to understand) method following this paper by Cameron Reed.

I'd take the simplest approach : solve the usual least-squares problem to determine the coefficients of the line; they will depend on the input data $(x_i, y_i)$. If the input data has an uncertainty $(dx_i, dy_i)$ then we can propagate it to the solution for the coefficients. We can do all this symbolically and substitute numerical values at the very end.

Now we can use our actual numeric data and substitute them everywhere in the above :

Finally we can plot the data together with the best fit and the model corresponding to changing the parameters by $\pm$ 1 standard deviation. 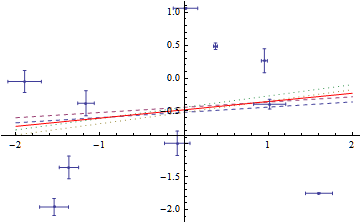 Here is a simplistic approach, but perhaps it is one step on from examining just the end points. It makes the assumption that nothing is known about the distribution of x, y errors other than they are uniform, if they are not uniformly distributed the problem becomes significantly more complex.

A vector of {xErr,yErr} pairs which represent the estimated, or measured, magnitude of mean error for x and y measurements at each value of x:

Here the values of mean x and y errors have been chosen to be constant, but from experimental data they might well be variable.

The simplicity derived from the uniform assumption is that the errors are symmetric, so the aggregate effect, of rotation or translation, on the linear fit cancel out. This allows for a simple addition of the mean error vector to the data to represent a least squares solution. 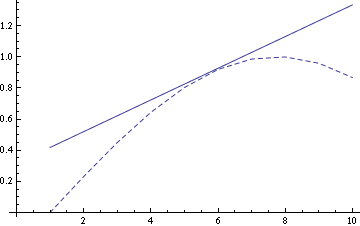 This is a slightly modified version(to amend its somehow strange error/uncertainty estimation behavior (which might be the result of some bug?)) of the answer of @J.M. I didn't found some place/website to store and share the codes (based on Krystek/Anton ) below so I post here instead (this is more likely a discussion then an answer):

(I really don't understand the code where dm and dk are calculated in ortlinfit @J.M. (due to my poor mathematica experience and math base))

I replaced uxks to #s manually. 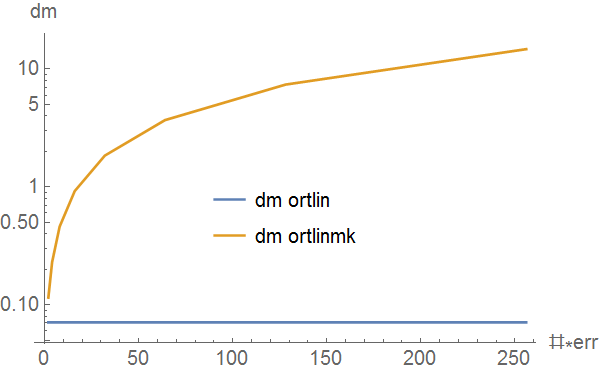 obviously the dm of ortlinfitmk2 is more reasonable.

2
How can I account for assumed X and Y errors when using findfit?
1
Fitting Data when both Variables Have Uncertainties
0
Plotting error bars in both dimensions for straight line model
1
x and y axis nonlinear error fit possible?
17
Using perpendicular offsets in FindFit
10
Does anyone have Mathematica code for Deming regression?
5
Linear regression with x and y errors
1
Find min-max for slope in linear fit
3
Weighted orthogonal least squares without constant term
0
Efficiency problem with least square algorithm (Error in both variables)
See more linked questions

7
Finding the linear regression of data and plotting it
5
Linear regression with x and y errors
3
Weighted orthogonal least squares without constant term
1
How do I specify the uncertainty of a parameter when using NonlinearModelFit?
9
Can one force a linear regression fit to go through an arbitrary point?
0
How to correctly show the slope of a linear part on LogPlot
4
Detecting Lines in Data