PlotLegends output graphics do not include legends when manually selected

I've noticed (in v11.0.1 and v10.3.1) a small problem with the graphic produced withPlot and the PlotLegends option: if you try to select manually the whole output graphic (mouse click) it won't include the legends ! It means you can't manually export the whole plot ("Save graphics as"), because you'll loose the legends ...

For example with this example taken from the docs:

There is no way to include these legends.

If you look at this same example in the docs (notebook not web) and select the graphic, it will include the legends because all the graphics where rasterized and are not anymore "native" plots (as indicated previously to me by @Michael E2).

I tried then to reproduce the doc "rasterized" graphic which actually has the Image type. It is interesting to see that the command:

produces an error (while other plots without PlotLegends won't):

The workaround here is to use Rasterize before Image (though Image should give directly the same result): 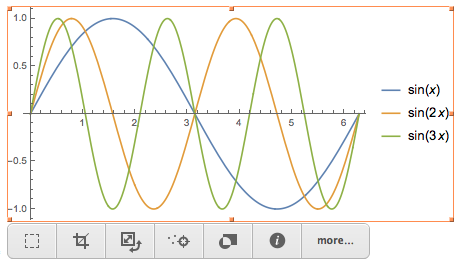 Once again, it is probably not a big problem as it concerns only the manual graphic export, but it looks clearly as a bug and there could be some other related (hidden) problems behind that ...

I think you can't select the plot plus legend and "Save Graphic as" because it is a Legended object rather than a Graphics object.

If you want to save it using a menu command rather than Export, you can select the cell bracket rather than the graphic itself, and select "Save Selection As" from the File menu,

This brings up the same dialog box as "Save Graphic As" but includes the entire cell contents in the output file.

Not the answer you're looking for? Browse other questions tagged plotting export notebooks legending or ask your own question.

16
Why are PlotLegends not combined with Plots?
21
Failure to export graphics by right-click when Notebook magnification is changed
7
Isolating legend from Show combination of plots
3
Inset an image into Graphic just large enough to hold it
1
Rescaling and Image Padding Issues with GraphicsRow