CPU timing for matrix rank calculation difference between 10.3 and 10.4 and 11.0

I run a small rank CPU test when new Mathematica version comes out. I noticed when version 10.1 came out that Mathematica rank calculation suddenly became extremely fast on a matrix when the size became over 2500 by 2500. (link at the very end). Here is from the link:

Mathematica 10.1 was surprisingly much faster on this test than 10.0.2. It seems Mathematica 10.1 is using different algorithm to compute the rank now to account for this drastic difference in speed improvement.

The speed boost was observed to occur at certain matrix size. At matrix size of 2500 or less, the same speed was obtained as with version 10.0.2. At matrix size over 2500, even by just one, a dramatic speed increase was seen. For n = 2500 Mathematica CPU was around 4.6 seconds which is the same as in 10.0.2, but by increasing the matrix size to n = 2501 , CPU time went down to about 1.4 seconds. This is 3 times as fast for essentially the same matrix size. This result was reproducible. This seems to indicate that Mathematica internally uses the same algorithm as previous version for smaller size matrices, and then switches to different algorithm for larger matrices.

Suddenly, in 10.4 and 11, this sudden speed up in rank calculation went away, and the CPU time went back to what it was before version 10.

Would some one be able to explain what happened to the speed improvement? and why now Mathematica is slower on this test than on 10.3? This is all on same PC, all on 64 bit windows 7.

This is the source code for the test

Here is the result. Notice the speed up when the size becomes 2501 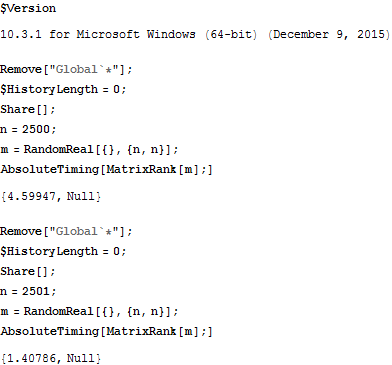 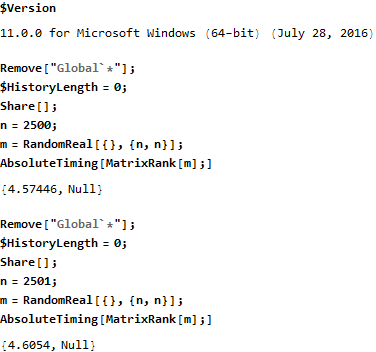 The full detailed report can be found here 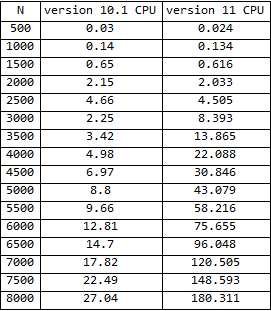 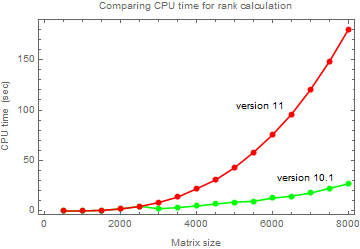 I think I have found something very important and I have a theory about what has happened. I run the rank test now on Matlab 2016a and also on Maple 2016, and discovered that the speed boost now is present in both Maple and Matlab. This tells me that the speed boost in rank calculation came from external library, which would be intel MKL math library which all three M's link to. So the speed boost happend before in Mathematica, simply because 10.3 was shipped linked to that library.

The question then, why did the speed boost go away in 10.4 and 11.0? The only thing that could explain this, is that Mathematica is not linked to the current intel MKL math library which had this speed in rank calculations? What else could explain this?

Here is Maple result and Matlab result with the new versions. Notice the sudden speed in rank calculation now, the same as used to be with 10.3 and at the same exact size: All on same PC, all 64 bit. 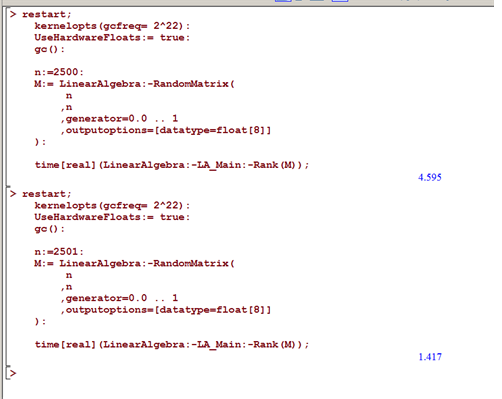 Here is more information. It seems the MKL version 11.2 had the speed boost in it based on checking the MKL DLL file version on the CAS I have. And that MKL 11.3 do not have this speed boost for some reason. This is assuming the issue is to due to MKL

From the above one can see that when MKL 11.2 is used, the three M's had fast rank calculations for Matrix size over 2500. Mathematica 10.4 and 11 changed from MKL 11.2 to 11.3 and I am guessing this is the reason why rank got slower. This is only a theory ofcourse.

It is the changes of SVD algorithm in MKL that affect speed of MatrixRank[] in Mathematica.

Particularly, the SVD routine dgesdd got speed boost only in MKL version 11.2, hence also the Mathematica.

A picture (Hum...a table) worth a thousand words:

This table shows the implementations of the functions in left most column, in different time period marked by MKL versions.

The red dgerdb is the core of fast SVD computation. These cipher-like dge??? names are LAPACK functions, see original post below to understand them.

Clearly, MKL v11.2 speed boost all its downstream softwares (the "3M"). But after that, only who use dgesvd got benefits. Mathematica always use dgesdd for SVD. But for an unclear reason, Matlab switch to the slow dgesdd at some point. I did a preliminary test for the fast code, and found no precision/accuracy lost compared to the slow one.

This table is obtained through techniques mention below, particularly the LD_PRELOAD trick. Here is some code I used. And thanks the university HPC for Matlab/Mathematica.

It is probably attribute to the change of SVD algorithm in MKL.

I don't have multiple versions of Mathematica or Matlab, and I run only Linux. But some implementation details are dig out:

MKL updated SVD code to "improve" the speed during that period:

The DLL or SO file of corresponding MKL versions might be needed to further find out what happen to them.

Here is a detailed steps to find out how Mathematica computes MatrixRank.

For Matlab, similar steps above also works, except that ltrace is failed to discover all calls to DGESVD. To fix that, the LD_PRELOAD trick is used to further confirm that DGESVD is the workhorse.

Now the question is: why DGESVD or DGESDD are changing speed, assuming Mathematica/Matlab did not change its MatrixRank implementation which is suggested by the version table in the asked question, then the only possibility is: MKL changed. MKL's release note does suggest this hypothesis (see the quotes in beginning), but we still don't know what happen to DGESVD/DGESDD in terms of algorithm or implementation.

I would like to add a wild guess here, in MKL 11.2, probably someone decided to use the "divide and conquer method" (wiki) for SVD even when only singular value is needed. See also the suggestion in comment of DBDSDC (which will be called by DGESDD).

The code currently calls DLASDQ if singular values only are desired. However, it can be slightly modified to compute singular values using the divide and conquer method.

Then one day, the MKL team found that divide-and-conquer is not accurate in many cases, so went back to the slightly slower but more accurate QR algorithm.

I actually have the "fast" version MKL, so investigate further here.

The new findings are:

As a summary of this edit, MKL is observed improving SVD algorithm (dgesvd), but Mathematica probably missed these benefits by using a different SVD routine (dgesdd).

Not the answer you're looking for? Browse other questions tagged performance-tuning linear-algebra or ask your own question.