Conditional Clustering of a set of 3D points

I've scanned through most of the clustering questions but none as specific as this. If there is, I will gladly delete this one.

I've tried using ClusteringComponents, FindClusters and Nearest, but it's not clear how to combine their options to make it work.

Here is a sample of the 3D point set . Assume 0.35 distance separation as the distance criterion. The output should just be a list of lists of 3D points, with each sub-list containing all points in a given cluster. In the data provided each line is the {x, y, z} coordinate of a given point.

For moderate data sizes one approach is:

The obtained clusters would adhere to the condition by the graph construction. Code for implementing this approach follows.

Get the data linked in the question:

Calculate the distances between the points in a matrix: 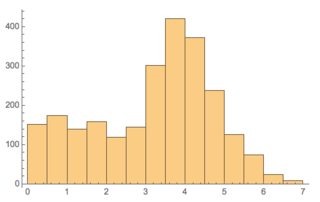 Pick a maximum distance and set elements exceeding it to infinity:

Make a graph from the obtained weighted adjacency matrix: 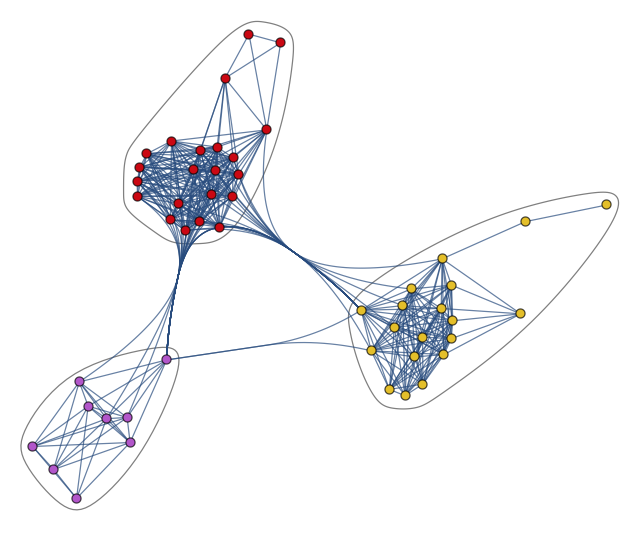 Visualize the found clusters in 3D: 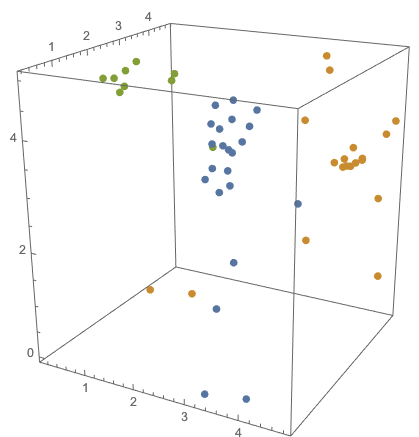 Note, that better or tighter clusters can be obtained using different max distances, and one can investigate for what max distances the graph becomes disconnected.

Take for example the following data 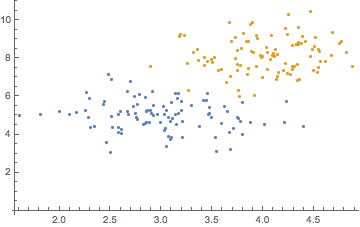 I define the following helper functions:

to find the nearest existing neighbors in existing clusters;

The algorithm can be applied to the data and plotted via 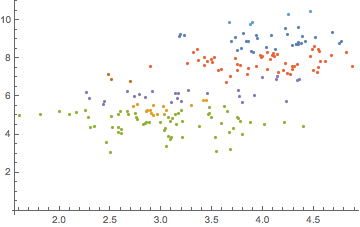 Showing the points in (random) order to the algorithm does produce varying results both in the way the points are clustered and the number of clusters. One way to make this actually useful might be to provide the algorithm with a initial seed of clusters as in the animation below. The seed used there consists of the four corner points of a unit rectangle. Note how a fifth cluster is formed by the algorithm when no other point within a given distance is found at the respective stage of the run.

Not the answer you're looking for? Browse other questions tagged machine-learning cluster-analysis or ask your own question.

6
Stopping Agglomerative clustering under a condition in Mathematica
5
Clustering 3D Data Points on a Periodic Cubic Grid
5
Provided an array of 2D point clouds, can we quickly replace distance- and index-based cliques of points with their median or mean values?
5
Code elegance and compactness. Help needed with Map, Apply
6
Why does FindClusters put closer points into different clusters?
5
ClusteringComponent and FindClusters are returning the wrong number of clusters and are inconsistent
4
Building a nine - region cluster chart with Tooltip to display labels associated with 2D points