How to remove redundant vertices from a graph?

I'm trying to generate tree-level graphs (no cycles or loops) with 3-point vertices only starting from a single vertex graph. I'm defining 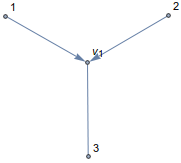 but when I try

with the vertex a being what I call redundant, and similarly by joining more graphs. The Join part contains

I want to know how to do this for any number of joined graphs, e.g.

As suggested in the comments, VertexContract[] is meant to do the job, but it does not work for me (Mathematica 10) when using subscripts; I'm using this notation because it promise to be helpful when trying to generalize. I found a workaround that also does the trick with SimpleGraph and VertexReplace, e.g. for the second case in my original question:

but then I'd need a way to go through the edges with redundant vertices to know what vertex replacements should be done!

Finding connecting pairs doesn't scale well. Better check only particular pairs, those with graph distance two, instead of all. So you can replace that Subset expression with list.

Not the answer you're looking for? Browse other questions tagged list-manipulation graphs-and-networks or ask your own question.

4
How can I construct "better" block graphs?
11
Finding the minimum vertex cut of a graph
2
Finding nonequivalent 3-cycles and edges of a given graph
4
Deleting vertices from a Graph and preserving structure
4
HighlightGraph highlighting the vertices but not the edges of a subgraph
10
Get or set vertex properties for all graph vertices at once
4
Algorithmic graph embedding (layout) based on the values of adjacent vertices
9
VertexContract and contraction of vertices of degree 2
6
How to find all possible paths between a collection of vertices in a DAG graph