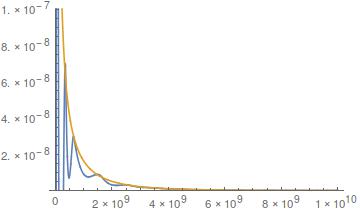 P.S. Also note that the interpolation for a and zedInt should be pretty good, a is continuous but not differentiable.

This is both an extended comment and an a qualitative answer.

First, because e is used for two different quantities, it is prudent to execute Clear[e] at the beginning of the code.

Second, the definition of lamavg is missing. From a related question, it probably is

Third, the NDSolve Method used seems to have no influence on the solution and can safely be omitted.

Fourth, the discrepancy between the initial condition and the value of the solution there does not seem so severe when plotted as follows. 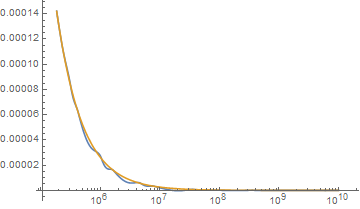 Because the scale length of the discrepancies is of order 0.0001 of the range of M, it seems likely that they arise from inadequate resolution. However, the appropriate resolution would be at least 10000 points, significantly increasing the running time of the code. 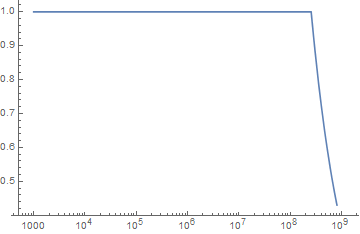 the advective differential equation there is given by

which can be solved analytically to yield

where f is an arbitrary function chosen to fit the initial and boundary conditions. Further, we would expect that the solution should be essentially independent of M for t < 2.56*10^8, and that indeed is the case. 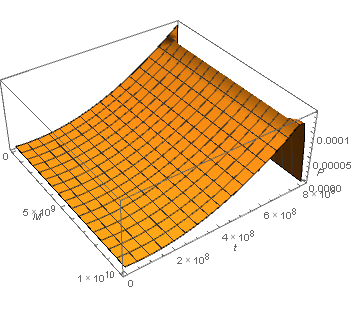 Finally, I would recommend that the variable M be replaced by a variable proportional to Log[M], which would accommodate better resolution of M by NDSolve, perhaps improving solution accuracy for very large t.

The actual differential equation in the question

also can be solved analytically,

although the relationship between s and t, obtained by solving

is rather cumbersome. After the boundary conditions have been recast as function of s and Log[M], f can be determined everywhere.