And their behaviour is 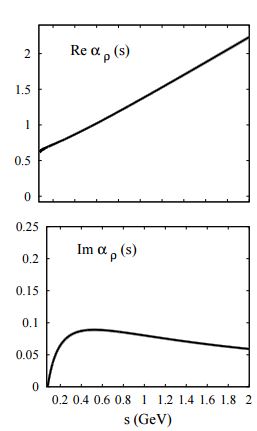 In principle I don't know the functions $\rm{Im}(\alpha)$ and $\rm{Re}(\alpha)$, but I know their behaviour between $s=0$ and $s=2$. I just need to know if the equation (1) from above is correct. For that purpose I made my own function of $\rm{Im}(\alpha)$ that behaves like the figure shown (I called it $\alpha$ first)

Supposing that at this point everything is all right, I have some points of my function and I want to deal with the numerical integration (1) shown above.

and the integration part goes as follows:

Obiously this integration doesn't give the result I wanted because I have to specify in which points the denominator goes to zero (so it can apply the PV).

Here comes my question. This $bi$ diverges everytime $s=si$. How can I specify in my function these points? I tried using the option

but it seems Mathematica 9 (the one I'm using) doesn't have this option. I also tried taking few points and specifying the singular points, but the function also diverges when $s$ tends to $si$ so it doesn't work either. Does someone have any idea how to do it?

P.S.: I don't want to specify what the variables mean because it's a much larger problem.

We can check the validity of the result with a hacky workaround:

Which as expected yields a close match.

10
NIntegrate fails to converge under almost any PrecisionGoal, MinRecursion etc. How can I trust the result?