Integration of a function of interpolating functions

I need to calculate the integral of a function of interpolating functions. Being more specific, the function I want to integrate is the following

with tau' being a variable instead of a number. The reason behind this calculation is that I need to obtain func as a function of tau.

A solution I have tried to implement is FunctionInterpolation, that seems to works very well when the function to integrate depends on two variables, as specified in other posts that I have read on this forum, but that does not seem to be applicable to the one-variable case (at least I have not figured it out).

There's not enough information in the question, but this approach fits one interpretation of the description of the situation. One can do the integral in the original NDSolve calls that generated rad and mm. (This may be what J.M. was suggesting in a comment. Or he may have meant executing a separate NDSolve call. I would recommend the approach given below.)

Example: The first two lines of the ODE system are uninteresting. The third line computes the integral of r[t], r'[t], and m[t]. 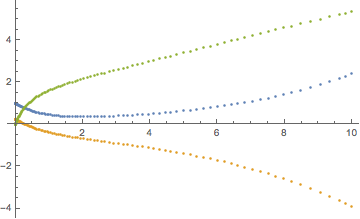 The integral is returned as an InterpolatingFunction:

Not the answer you're looking for? Browse other questions tagged numerical-integration interpolation or ask your own question.

0
How to Integrate a function of an InterpolatingFunction?