Running the following code and pressing the play button under b will input -2147483648 in b.

I believe this occurs only when all of these are true:

Curiously, when the initial value of a or b is set to anything other than 1, when the Appearance is not "Open", or when the step size is removed, the code runs flawlessly.

I think this is a bug, but it needs to be verified by other users.

Edit: Part seems not to be required for this to occur.

On the other hand, because the order in which control variables are initialized is not clearly documented and sometimes appears to be very strange, I have come to be cautious about such initialization.

To see some of the strangeness, let us consider two variants of your code. 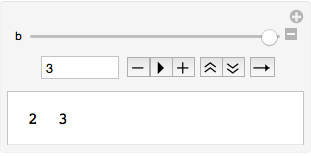 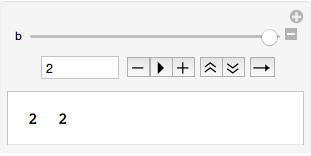 Adding the control specification for a did have a effect, but not the one I predicted. Now the 1st argument of Manipulate expression is setting the upper limited of b Why? I don't know. However, it does have the merit of working the you expected you code to.

To get the same effect without the DynamicModule wrapper, you can write

It has the same behavior as the 2nd example above, and is the work-around I recommend. The value assigned to a doesn't have to be 3, of course. Any value the would be acceptable as the upper limit element of b will do, which makes me think that this value becomes the upper limit of b briefly during initialization, but gets overridden further along in the process.

This doesn't answer the question of "why does this bug out" but this answer is a DynamicModule that is equivalent to your Manipulate that you could add your Initialization function to.

Not the answer you're looking for? Browse other questions tagged list-manipulation manipulate dynamic or ask your own question.