I'm fairly sure the following is a bug, and I would normally just report it to WRI. However, this is related to my answer to When using NDsolve, how to determine the positions of steady states? So I thought I would post it as a question, for two reasons. One is to let the community verify that it is in fact a bug. The other is to give a reference to the issue for the other question.

Here is a simplified example. With the WhenEvent rule x[t] -> 1., NDSolve fails to integrate the ODE and gives no message.

One the other hand, using an empty action, the system is integrated:

Problem also seems connected to the use of the derivative x'[t] in the event condition. It works fine with x[t]. 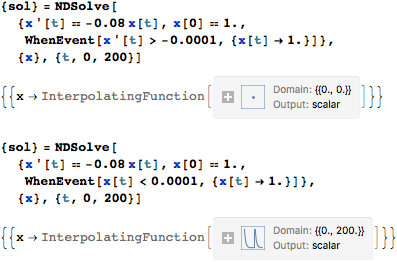 Am I doing something wrong, or is it a bug?

Here is a workaround suggested by the response I received from WRI: 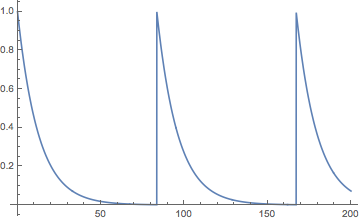 Warning: This option works by converting the system to a DAE, for which only machine-real code is available. That is probably sufficient for most cases, but it does limit one's options. For example, you cannot change WorkingPrecision, and it will not solve a BVP.

The response from WRI suggested using NDSolve[.., SolveDelayed -> True], which indeed works. Its use with NDSolve is pretty much undocumented, and it shows up in red in the front end. One can find references to it in the documentation for the messages NDSolve::ntdv and NDSolve::ndnum. While the text for NDSolve::ntdv in the documentation advises trying SolveDelayed -> True, the text in my current system (V10.4.1) reads like this:

It's hard to know which option should be considered the preferred solution. After a little testing, they seem to produce identical solutions, so I feel they might be invoking the same internal code. I opted for "EquationSimplification" because it is documented for DAEs. 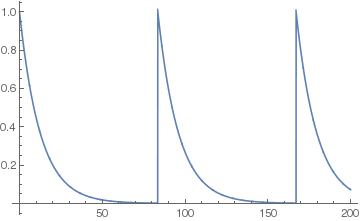 Not the answer you're looking for? Browse other questions tagged differential-equations numerical-integration bugs event-detection or ask your own question.

77
How to find all the local minima/maxima in a range
17
What's behind Method -> {"EquationSimplification" -> "Residual"}
6
When using NDsolve, how to determine the positions of steady states?