Could anyone cite some papers that describe Mathematica's morphological thinning algorithm?

Some five years ago I have asked exactly this question to the Wolfram support people. Below I have taken their respective answers (one sentence for each Method) but have added a lot of further reading. Finally, in an Add-On I demonstrate my own implementation of Rosenfeld's 1971 variant of a 2D thinning algorithm, in order to let you compare a few methods.

However, as this paper is a survey, it might be better to use the original reference:

Guo Z and Hall RW: "Parallel Thinning with Two-subiteration Algorithms." Communications of the ACM, Vol. 32, No. 3, March 1989, see section 3 starting on page 360 entitled "A TWO-SUBITERATION THINNING ALGORITHM" (referred to as Algorithm 1 throughout the paper)

Besides, there are further roots cited by Guo and Hall:

Zhang TY and Suen CY: "A Fast Parallel Algorithm for Thinning Digital Patterns." Communications of the ACM, Vol 27, No. 3, March 1984

Lü, HE and Wang PSP: "A Comment on 'A Fast Parallel Algorithm for Thinning Digital Patterns'" Communications of the ACM, Vol 29, No. 3, March 1986

Method -> MedialAxis is described in Gonzalez/Woods "Digital image processing", in a section named like "morphological medial axis by thinning".

In fact, in the first edition from 1992 for the medial axis computation the description is given in 8.1.5 "The Skeleton of a Region", in the second edition from 2001 you find it in under 11.1.5 "Skeletons" (sorry, the first two paragraphs are missing there), in the third edition as of 2010 it is given in 11.1.7 "Skeletons". Let's see where the authors will include it in the upcoming fourth edition :-)

As the copy referenced above was somehow cropped, here is the neighborhood as is defined by Gonzalez/Woods:

Anyway, Rafael Gonzalez and Richard Woods cite Harry Blum who originally has proposed the concept of medial axis transform back in 1967 (naming it as "medial axis function - MAF"):

Since Harry Blum is rather giving an abstract description of the general properties of the MAF and is not proposing a certain computational algorithm to obtain the MAF, and as Gonzalez and Woods do not cite anything else here, we need to assume that the given medial axis algorithm is their original work.

I was just thinking if I could please some of you by adding my own implementation of the good old Rosenfeld thinning. It was published decades ago:

Stefanelli R and Rosenfeld A: "Some Parallel Thinning Algorithms for Digital Pictures", Journal of the ACM, Vol. 18, No. 2, April 1971

If you try to copy this code above, please make sure that no \[Times] symbols are being inserted in the huge numbers when pasting into your Mathematica front end.

To be honest, it is not parallelized, to do so, one would have to replace the inner of the two nested Map inside the While statement with ParallelMap, however, the overhead data traffic is too high for typical images. If someone has an advice for a better parallelization, let me know. Also, please note that a single channel binary image is being expected. As you see I am using two different look-up tables to find the simple points in either 4- or 8-neighborhoods.

Let's see how it works: 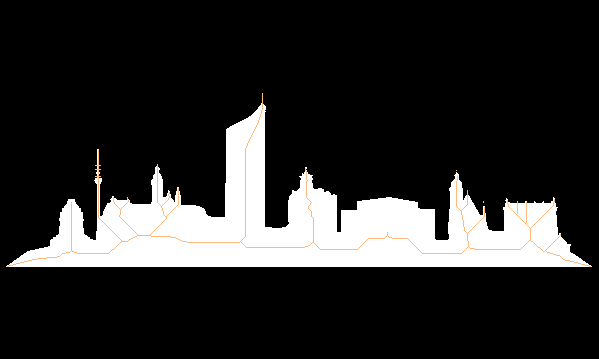 Here the variant with a 4-neighborhood (ensuring the skeleton's pixels are always edge-connected): 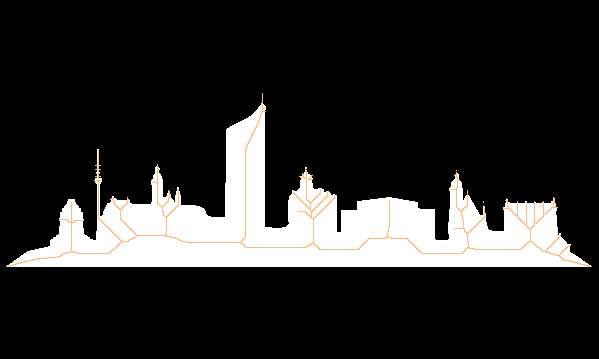 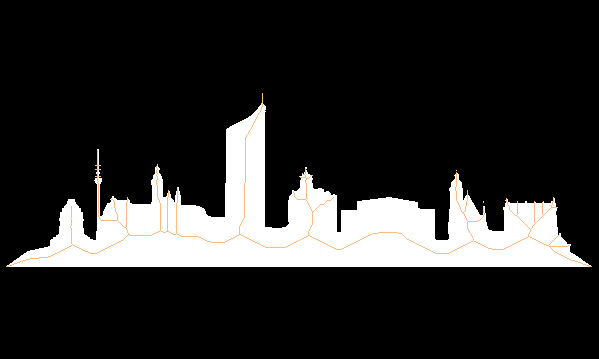 Finally, here is the Gonzalez/Woods variant 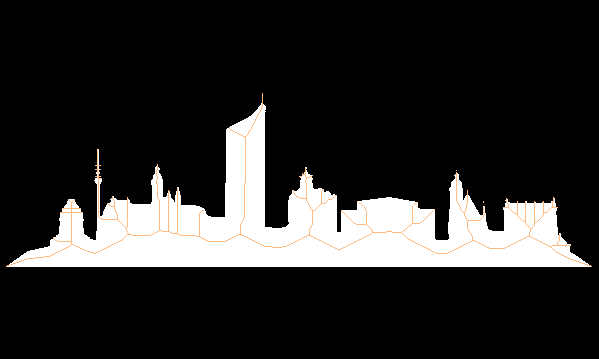 Now it is up to you to decide what do you like best...

Has anybody some 3D thinning algorithm implemented in Mathematica?

Not the answer you're looking for? Browse other questions tagged image-processing implementation-details or ask your own question.