I have the following expression

which gives me an error of sth like referencing some memory, I guess it's because it's out of memory?

So I tried int1 = Integrate[s, x] which gives me an expression involving the EllipticF function which I've not heard of, and the simplify command can't give me a simple form. Then I found that int1=0 when x=0, so the integral should equal to

But this expression still involves the EllipticF function. I wonder if this integration is so complex? It's really out of my expectation, I thought it should be some simple problem that had appeared in the textbook..

Finally, if I have to use a numerical integration instead of symbolic, I wonder how I could plot $s$ w.r.t. $af$ in the range of $af$ in [0, Pi/2]? I tried the command

which gives me the error:

then it gives me a frame without any plot, don't know why.

Could someone help me on simplifying this expression, preferably symbolically, or generate the desired plot numerically?

P.S. The above problem comes from an expression

So if the latter problem can be solved, the original problem is solved. 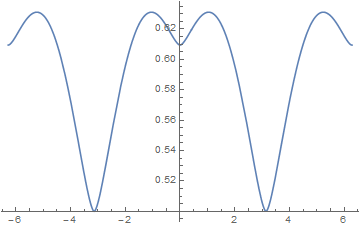 Finding the maxima and minima using the int expression is also possible. Let's first isolate a region of interest. Inspection of the plot shows that the function is even and periodic, with period $2\pi$), so we can concentrate on the region $0\le\text{af}\le\pi$: 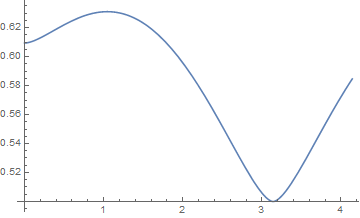 Not the answer you're looking for? Browse other questions tagged plotting calculus-and-analysis simplifying-expressions or ask your own question.

2
How to numerically integrate this integral?
3
Is it possible to simplify a trigonometric expression only in terms of $\cos (u)$ OR $\sin (u)$?
9
Finding simplifying substitutions for an integral involving limits and integrand
4
NIntegrate and Integrate giving different results
3
Simplify trigonometric identities in complex expression
1
Mathematica is not simplifying trignometric functions under Abs although I provide assumptions
1
Extract different part of a polynomial with square root $a(x)+b(x)\sqrt{c(x)}$