How to reduce each column of a dataset? 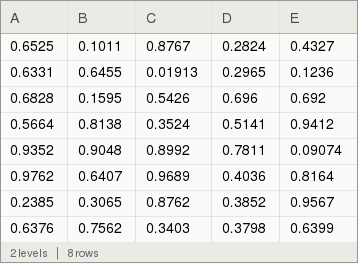 ...I want to apply some reduction function (like Total or MinMax) to each column separately, so that the result would be a one-row dataset, with the same number and names of columns as in the original dataset.

For example, if the reduction function were Total, the desired result would be

For MinMax it would be

Does the built-in Dataset functionality directly support this type of operation? Or does one have to unpack the Dataset, apply the reductions to the columns in the underlying data, and stuff the results in a new Dataset?

NB: If the former is the case, I'm looking for more than an incantation here. I want also to understand how the proposed solution follows from the Dataset syntax given in the documentation.

FWIW, the code I used to create the data dataset is given below.

For Total, this suffices:

but for a general approach that also works with MinMax, try:

You may use Merge.

13
How to make datasets display correctly?

31
What is the natural way of using Dataset to get a FittedModel?
13
Add column heads to a dataset
12
Create a new dataset column based on the row key
8
Transpose fail in 11.1 Dataset
16
How to work with a Dataset?
5
Applying a function on several columns of a dataset fails on Missing
2
Plotting using a Dataset, setting the color based on one column and plot markers based off another column
5
Data munging Mathematica Dataset object